Fire and Sword by Harry Sidebottom

Throne of the Caesars: Book 3 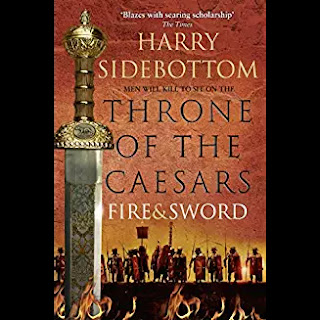 The Roman Empire has fallen into chaos. The Emperor and his son are dead, and former Emperor, Maximinus Thrax, hopes to reclaim his rightful position, but the Senators are more interested in saving their own skins should Maximus succeed.

This was a violent and bloody period of Rome’s history, a period and situation which is reflected in this novel, which is impeccably researched.

As the third in a series, although a stand-alone novel, I would suggest you start at the beginning to maximise enjoyment of this author’s wonderful talent as a writer, and involvement as a reader with the well portrayed characters and events.

A definite for Roman History lovers!