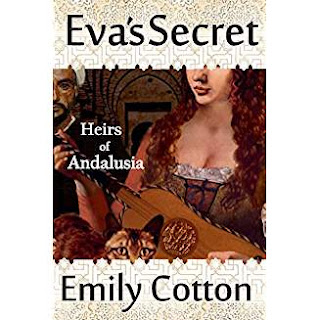 I must admit that initially, I was somewhat hesitant to this book – having a cat as a POV character was not something I felt entirely comfortable with. Likewise, the formatting and editing could do with a brush-up and in the first few chapters the here and now was interrupted by flashbacks that could have been woven more seamlessly into the narrative.

But by then, of course, I was already hooked by the story of Eva de Paiza, her cat Tabita and the complexities of surviving in early 16th century Granada when your father has just been dragged off by the Inquisition.

Rarely have I read a book that so utterly transports me back to the time depicted. Clothes, furnishings, food, medicinal treatments – all has been so meticulously researched, all is so elegantly inserted in the narrative. Granada is just a few decades away from its recent Moorish past, and the city is a polyglot mix of Saracens and Jews (albeit that all of them officially are Catholic), good loyal Spanish Christians and the odd smattering of others. Arabic is still spoken, those that work in trade are generally bilingual, and even the various faiths have rubbed along—albeit uneasily—until the Inquisition decides enough is enough: false converts must be punished.

Add to this Eva’s own sad story: her father is a brute, her mother fled the home when Eva was eight or so, and now, as a consequence of her father’s imprisonment, Eva is lured into a house where she finds herself reduced to being a slave, a chattel for sale.

All of this drama could have resulted in a sturm-unt-drang pastiche, but Eva’s own personality—mild, meek and somewhat naïve—keeps the narrative firmly on the ground. Eva is no feisty heroine intent on kicking off the traces of her slavery. No, Eva is a very young woman who bears things and makes the best of what she has, praying that God will see her safe.

Eva’s Secret is a love story, and accordingly there is not one protagonist, but two (plus the cat). Baseel is the Saracen in charge of managing the day-to-day business of the merchant who has enslaved Eva. He is a devout Muslim, disfigured by childhood disease, and alternates between being harsh and aloof and warm and caring—although this latter side he reserves for Eva only. Not that Eva notices—at least not initially. Her childhood experiences have made her wary of all men, and besides, Baseel is a Muslim, while Eva’s dream has always been to become a nun. Not the most auspicious of circumstances, one could say…

Two wonderfully depicted characters in a vibrant historical setting makes Eva’s Secret a delightful read. Even Tabita the cat grows on me, albeit that I did have some problems with this feline’s spiritual experiences. No matter: all in all, Ms Cotton has delivered an engaging story set in a tumultuous time and a somewhat exotic setting.
Warmly recommended!