A Discovering Diamonds Review of: IN A GILDED CAGE by Suzanne Appleyard 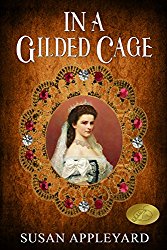 In a Gilded Cage by Suzanne Appleyard is a skilful attempt at portraying the famous Empress Sisi / Elizabeth of Austria, from the days before she meets her husband in the mid-1800s until his inauguration. Sisi is a figure who has always inspired writers, historians and even film makers; the wife of Emperor Franz Joseph I, and thus Empress of Austria, Queen of Hungary and Queen consort of Croatia and Bohemia.

Appleyard’s book is among the more serious and factual of them, less romanticised and more influenced by the consistent rumours and darker sides of Sisi, as well as putting her life in the wider political context as the personal circumstances of her upbringing and life at Vienna’s court.

Having grown up in Bavaria with the Sisi movies as regular fixture in the TV programming, I found much of Appleyard’s portrayal plausible, explaining the parts of Sisi’s life that do not seem to add up with the public perception. Written in a well-researched and documented fashion the style does sometimes verge closer to a biography more than a novel. The use of language and descriptive detail is very pleasing and historically this is of great value, so the book will very much appeal to readers who seek the more accurate over the more 'speculative' side of history. It also managed not to spoil my love for the romantic versions of the story by showing Sisi in a sympathetic light.