A Discovering Diamonds Review for: REMEMBER, REMEMBER the SIXTH of NOVEMBER by Tony Morgan 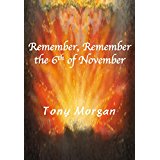 Tony Morgan’s novel is an alternative history addressing the ‘what ifs’ of the gunpowder plot. Although I knew very little of the detail of this famous event of English history, not beyond the basics that we all know, it is evident from the first line that this is not going to be the traditional story. Reading it over those first few days of November, almost as the events unfolded added a poignancy.

The novel starts with a small boy asking for a ‘penny for the king’ rather than the expected ‘Guy’. This sets the trajectory of the novel and you want to read on to find out how it could all end so differently.

The novel follows the fortunes of several characters on both sides of the political divide over the several days before the plot and the aftermath. The reader is led to feel most sympathy for the plotters, a turnaround as we are generally expected to believe them evil for what they planned and the shocking loss of life that would have followed. In this we are almost rooting for them, despite a sense of futility in that we know the plot failed. But this is alternative history, so the reader is never sure of what they think they know.

Well written and engaging, the only character who threatens to become a caricature is King James himself, but he is the least sympathetic character in the novel and the almost cartoonish treatment suits him. Robert Cecil undergoes a transformation that is almost – almost – not credible, but I believe the author wished to redeem him and I think he does this fairly successfully. The novel feels right, the detail of the setting is believable, and that renders the rest plausible. The cover could be better and, if I'm honest, lets the book down a touch, a better cover would attract more readers, but the inside works perfectly OK, even on an iPhone. It is a first novel and in places this shows, but Morgan has definite potential and I hope he goes on to write more.

This novel is being sold to benefit two great charities, Save the Children and the fund set up to support victims of flooding in the town on Tadcaster, Guy Fawkes being born and raised in nearby York. If a better reason to buy this was needed, other than it being a satisfying read and well worth the effort, then these two charities are pretty good ones!

(note from Helen Hollick: the author tells me that already a lot of money has been raised - but more is needed!)