A Discovering Diamonds Review of The Viennese Dressmaker by Kathryn Gauci 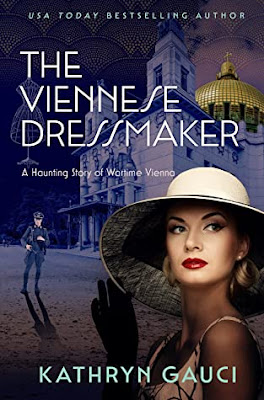 Fictional Drama
1930s / 1940s WWII
Vienna / Austria
The Viennese Dressmaker by Kathryn Gauci is set in the 1930s to 1940s in Vienna during Hitler's rise to power. The novel's protagonist, Christina Lehmann is a successful couturier who caters to the Viennese elite.  She employs and has among her clients both Jews and Catholics. Mirka, her favorite seamstress is among the hundreds of Jews murdered by Nazis on the night of Kristallnacht or the Night of Broken Glass, a true historical event described vividly at the beginning of the story.
Christina is horrified, yet she is strong and kind, risking her safety to help Mirka's young children. As time progresses, the Nazis close in on Christina's inner circle, including her lover Max who is half-Jewish. Although his secret is known only to a few trusted friends, the Gestapo discovers his true identity. Besotted with Christina is her childhood friend, Dieter Klein, a high-ranking Nazi official who despises Max for winning Christina's heart. Unfortunately, the lovers are torn apart when Max "disappears".  When Christina is informed of Max's precarious situation, she is confronted with a nauseating choice: acquiesce to Deiter Klein's amorous proposition or risk losing Max forever.
Author Kathryn Gauci's prose is elegant and vivid, capturing the horrors of the Nazi regime's unconscionable cruelty while contrasting it with the opulent life of the Austrian elite. The novel is studded with meticulous details of Austrian architecture and cuisine and intricate descriptions of aristocratic Viennese women's attire.
The story moves at a measured pace, except in the final few chapters when it picks up tempo. My one criticism - and it is a minor one - is that the protagonist's character does not significantly change during the course of the story, although she definitely rises to the occasion as her life becomes increasingly difficult.
With fascism on the rise in many parts of the world, this novel is a must-read for us to understand why dictators must be stopped. Dictators destroy humanity, not just who they target at the outset.
Reviewed for Discovering Diamonds