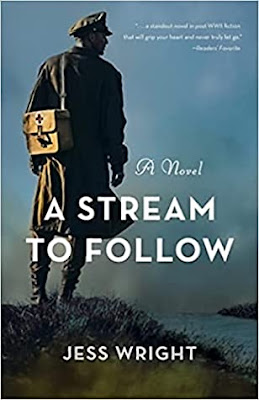 Fictional Drama
1940s
USA
A Stream to Follow is set primarily in a small town in Pennsylvania in the years immediately following WWII. Both Bruce Duncan and his brother Glen served in the war; Bruce as a front-line surgeon, Glen as a fighter pilot. Both were severely injured and carry scars both physical and psychological, challenging their abilities to settle into lives put on hold for the war.
The author is a professor of psychiatry, with several non-fiction books on depression and anxiety preceding this first novel. His expertise informs his portrayal of the psychological issues which both Bruce and his brother have: both deal with PTSD, but Glen also fights addiction and other diagnoses. Portrayed sensitively, they are part of the tensions of the story, but not the only ones. Wright weaves many of the changes and tensions of post-war life into the personal story: the struggle against industrial disease in the face of indifference couched as a concern for employment and the economy; social change reflected by a woman doctor setting up practice; conflicts of class and economic status. He captures the flavour and feel of post-war fiction, bringing immediately to my mind the 1946 film The Best Years of Our Lives and its depiction of servicemen adjusting to post-war small-town life.
Bruce is a fly-fisherman, and the passages describing his hours on the rivers are almost lyrical, contrasting the peace of nature and quiet contemplation against the problems of his daily life. It is this pastime that brings him another of both his conflicts and his joys: the English woman Amelia, whom he meets on the River Test in Hampshire. Also a fisherwoman, Amelia is the heir to the estate on which Bruce is fishing, with responsibilities to her ancestral lands. Their love story is fraught with complications: neither can easily leave behind their obligations at home.
The scenes in England ring less true, even when seen through Bruce’s, an American’s, eyes. Some of the terms used by Amelia are odd: V-rocket, rather than V2 or the more commonly used ‘doodlebug’; ‘manor’ rather than ‘estate’ when referring to her inherited lands. But forgiving those, Amelia’s indecision is that of many war brides: does she leave behind everything familiar to join the man she loves in a new land?
A Stream to Follow is a nostalgic book in its depiction of a time when church and community could be relied upon for support, when small-town physicians made house calls—but it also does not shy away from the secrets and scars carried by men and women living their everyday lives.
Reviewed for Discovering Diamonds