A Discovering Diamonds Review of A True and Faithful Relation by M.J. Logue 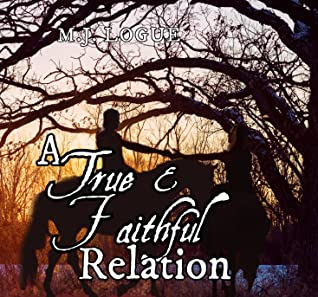 fictional drama / fictional saga
17th century
England
“In this relation of the events of October, 1664 - the month in which the Russells married, if you cast your mind back to the events of An Abiding Fire - we return once more to the sleepy world of Restoration Essex. It's still a brave new world to one Thankful For His Deliverance Russell, sometime Ironside, occasional intriguer, civil servant, and now - to his astonishment - official husband-to-be of the lovely Thomazine. In a month's time, they will be man and wife, and even the forces of darkness cannot come between them. But how come his very common-sensible Thomazine suddenly thinks the forces of darkness would have any interest at all in the marriage of a retired soldier and an Essex goodwife? And more to the point, how come his old friend Lucifer Pettitt is encouraging this superstitious nonsense? A true, faithful, and rather silly relation of mistaken identity involving demons, loot, hellhounds, bad poetry, and highwaymen. Possibly some swearing, in both English and French. And maybe one or two last-minute lessons in compromise, and the nature of enduring love, for both of them.”
One of the things I like about M J Logue’s novels, be they about the English Civil War (with  that rascal Holofernes Babbitt) or after the war with (equally as much of a rascal) Thankful Russell, all the characters are so believably real. To the extent that I get very disappointed when I can’t find them mentioned in any non-fiction books about Charles I or II or Oliver Cromwell and co. It is a habit of prolific readers of historical fiction to assume that charismatic characters were once real-life people; for authors to be able to endorse that assumption, apparently effortlessly, is a sign of excellent writing. And M J Logue is an excellent writer.
Another thing I like is how Ms Logue has skilfully continued her saga of these two main characters by seamlessly dove-tailing her 17th-century War Years stories to the events of the post-war and post-Cromwell years. Aided, in the latter case, by a third main character, Hollie’s daughter, Thomazine.
It was such a pleasure to discover another tale about these wonderful characters. A True and Faithful Relation is a short tale that slots in between the other stories already published. For 99p (less than a cup of coffee) it is an amusing quick read entertainment about family, love, pre-marriage nerves, misunderstandings and an intriguing element of the supernatural by way of a monster of a dog.
My only (very slight) quibble about this episode of the Russell/Babbitt life is that if you haven’t read any of the other tales this one might be a little confusing – so start at the beginning with The Red Horse... In my opinion, you'll not regret it. However, I do hope the author doesn't mind me saying, but these super stories are being let down by poor quality covers.
The advantage of these short tales is that they are inexpensive (even free in a couple of instances) easy reads, but what I would welcome, for the ease of convenience regarding which story comes where, is for Ms Logue to collect them together in chronological order as one anthology, and to include a reference of where the main stories sit in the scheme of things. That would be a collection to enjoy several times over.
Reviewed for Discovering Diamonds