Upon the Malabar Coast by Philip K. Allan 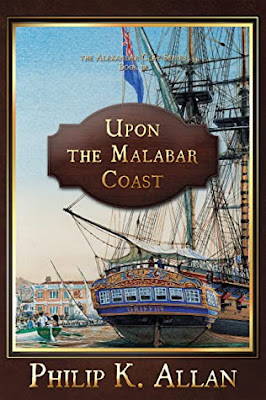 Amazon UK
Amazon US
Amazon CA
Amazon AU
Goodreads
Nautical adventure
Napoleonic / 1800s
Alexander Clay Series Book 9
I've reviewed three previous installments of Philip K. Allan's dashing and dauntless Alexander Clay series of nautical adventures. His latest volume—ninth in this estimable series—has confirmed my creeping suspicion that Mr. Allan is some variety of nautical-literary wizard. How else has he managed to produce so many volumes with both dizzying rapidity and unflagging excellence? This is a rare combination in historical fiction.
At the end of the last voyage of Captain Alexander Clay and his intrepid crew, an uneasy peace had descended. Savvy readers were already aware this would be a brief interlude in the two-decade struggle between Revolutionary, then Imperial, France and her neighbors.
After a teasing Prologue, the book proper opens with two of the most endearing of Clay's tars from earlier volumes, Able Sedgwick and Adam Trevan, settled into a life as fishers sailing out of a tiny port on the Cornish coast. That their boat is kept in Bristol fashion at all times foreshadows that these mates are not destined for a long sabbatical from His Majesty's service. With Allan's trademark quarter-deck/gun-deck parallelism, the narrative then jumps to the more gentile and bucolic lives of Captain Clay and his longtime comrade and more recent brother-in-law, John Sutton, living with their families on half-pay and rather bored with their newfound connubial bliss.
Clay's and his crew's return to service does not come quite as expected.
Open hostilities upon the high seas have not yet resumed between England and France. Instead, with the winds of war rising but not yet blowing a full gale, the messenger who arrives to recall Captain Clay is a Foreign Ministry diplomat. The Government, it seems, wishes Clay and his ship to convey said diplomat on a sensitive mission to India to foil some nascent French meddling there.
The most taciturn of the main characters, Clay's redoubtable HMS Griffin, is languishing in melancholic retirement at anchor in Plymouth Sound, her masts stepped and her gun deck emptied of ordnance. It would be Captain Clay's first task to reassemble both his ship and her crew. Given the intense loyalty inspired by the master of Griffin, we sense the inevitability of their successful recall, including Trevan and the newly wedded Sedgwick.
Upon the Malabar Coast contains the requisite sea battles, all painted with Mr. Allan's unstinting palette of tense authenticity mixed with an often unsettling intimacy. But this story also takes a more languid pace than previously recounted voyages of Clay and his crew. Since the sea voyage from the Devonshire coast to India in these pre-Suez Canal days required at least six months' sailing, one would expect a bit of languor. It presents an awkward challenge, since documenting in logbook fashion would comprise the sweaty quotidian lives of painfully bored sailors. The author finds the right balance and keeps the reader turning pages throughout right through to the dénouement with the perfidious French.
From the very title onward, this is a tale evoking the magnetic allure and heady exoticism India held for 18th-century Europeans, artfully interwoven with building intrigue and sinuous subterfuge. One would hope for no less a voyage for Clay and his stouthearted band. Philip Allan once again delivers a gem of a read and I highly recommend this novel, as well as its progenitors.
Reviewed for Discovering Diamonds
© Jeffrey Walker
e-version reviewed