Sisters at War by Clare Flynn 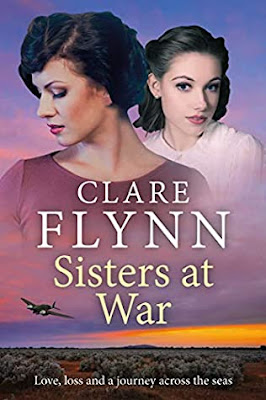 Amazon UK
Amazon US
Amazon CA
Amazon AU
Goodreads
It is 1940 when sailor Will Kidd survives a German attack on his ship, Christina. An experienced sailor, Kidd is a member of the merchant navy, i.e. those men who risk their lives to keep Britain afloat by ensuring a steady supply of life’s essentials. He is also married to Hanna, and while he is totally convinced it is his duty to continue with the merchant navy, Hanna suffers under the strain of constantly fearing for his life—something his recent experiences aboard the sunk Christina acerbate.
Hanna Kidd is a wonderful character. Young but markedly mature after surviving a sequence of harrowing experiences, she is one of those people who always sets others before herself. It is Hanna who cooks, cleans and generally keeps the household running in the home she shares with her younger sister Judith, a somewhat older woman called Nance and their landlord, Sam. Hanna is also very much in love with her husband—and he with her. Ms Flynn does a beautiful job describing her two protagonists and their relationship, defined by the few, precious moments when they’re together before Will’s duties yet again carry him off into the unknown.
Will has a friend, an Italian called Paolo. When he introduces his friend to Judith it is immediately apparent to Hanna that Judith is smitten. It worries Hanna: Judith at seventeen is a fragile person—or so Hanna thinks—scarred by the death of their mother, by Judith’s own near-death experience and the subsequent execution of their father for the murder of their mother.
Personally, I was not much taken with Judith, a self-absorbed young woman who considers herself entitled to Hanna’s support—but rarely sets her own interests aside to be there for Hanna. Everyone, it seems, assumes Hanna can handle her own problems and theirs. No one—except for Will, and to some extent Sam—realises that sometimes the load on Hanna’s shoulders is much too heavy.
When it comes to Paolo, Judith scoffs at her big sister’s concerns. She is in love with Paolo and is already envisioning a rosy future together with him.
And then Italy declares war on Britain.
Overnight, Paolo becomes an unwanted alien. His experiences at the hands of the British will leave him an emaciated wreck in a internment camp in Australia, while in Liverpool Judith struggles with the fact that she is pregnant—and unwed, seeing as the baby’s father is far, far away.
Ms Flynn delivers an emotional story set against the background of a ravaging war. Air strikes, the terrors experienced by Hanna and her family as they huddle in their little bomb shelter, homes reduced to rubble, a constant shortage of everything from sugar to fabric—it is all adeptly described. Added to all this Hanna’s gnawing fears for Will, Judith’s for Paolo. Torpedoes blow holes into hulls, ships list and sink, and in the midst of all this, there’s the potted hyacinth Hanna receives as a reminder that life  still goes on. The apple trees flower, the grass grows high and fragrant, and now and then the sun shines—a necessary contrast to the grimness of life while at war.
No family escaped WW II unscathed—this applies to Hanna’s family as well. But what happens I leave for the reader to find out for themselves by picking up Ms Flynn’s well-written novel.
Reviewed for Discovering Diamonds