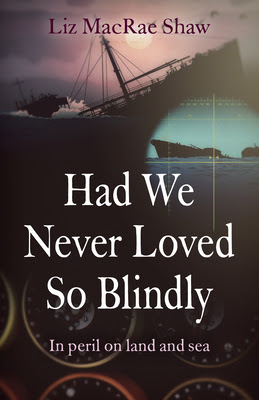 Amazon UKAmazon USAmazon CAAmazon AUGoodreads
fictional drama
WWII
"In 1937, fisherman's son, John Norman's first encounter of Felicity MacDougall, the daughter of a retired tea planter, is prickly at best. But, a chance meeting during a London air raid leads to a tentative romance, which becomes long distance when John joins the Navy and Felicity takes a job at the infamous, secretive Bletchley Park. Their relationship falls prey to the timeless obstacles of insecurities, doubts and misunderstandings. Can they overcome the distance between them, and also the war? This love story, forged amid the emotional intensity of WW2, is the beating heart of Liz MacRae Shaw's new novel. John and Felicity's relationship has fateful consequences, not only for them, but beyond, into the next generation..."
Had We Never Loved So Blindly combines the coming-of-age story of star-crossed lovers with elements of a family saga. The song Ae Fond Kiss by Robbie Burns quoted in the prologue aptly suggests the love and brief, sad, joy of this heart-rending tale. The main characters are John Norman, the son of a humble Skye fisherman, and Felicity, the only daughter of a well-to-do father, whose concept of family sentiment ceases at paying her school fees.
Both John Norman and Felicity believe themselves to be ugly ducklings, handicapped by having to wear thick-lensed spectacles. In John Norman’s case, his eyesight does limit his ambitions because he is forced to join the Merchant Navy during World War Two, rather than go into one of the Forces. While he works as crew on cargo ships, Felicity is sent off to finishing school in Switzerland, where she improves her French and German sufficiently not to catch a suitable husband, but to become part of the vital behind-the-scenes role played by women at Bletchley Park and ‘listening stations’ around the British coast. Felicity is intelligent, but her upbringing as a motherless child at an all-girls boarding school has not prepared her for the outside world, and even less for a world turned upside down during wartime. Felicity’s inability to read social cues or understand how other people might be feeling forms the background to her story. Felicity, is clever, but naïve and unwise.
Author Liz MacRae Shaw, on the other hand, has a very perceptive understanding of human nature and it was this that kept me reading until late at night. I really wanted John Norman and Felicity to survive their dangerous and traumatic war experiences; I turned pages to find out when and how they were going to accept their special mutual attraction and turn that into a wonderful romance. But, as in real life, the war got in the way.
Burns’ song at the beginning should have warned me...
On the whole, this is a quiet read interrupted by dramatic, terrifying moments of danger at sea. I was drawn into John Norman’s humourless family, understood his mother’s silent, sharp response when her son goes to sea; and if I became impatient with Felicity for her metaphorical short-sightedness I still empathised with her situation.
If I have a criticism, I would have liked at least a glimpse of a brighter future for the characters, however, Had We Never Loved So Blindly is compelling historical women’s fiction and very well worth the read.
Reviewed for Discovering Diamonds
©  J.G. Harlond e-version reviewed