A Discovering Diamonds review of The Lengthening Shadow by Liz Harris 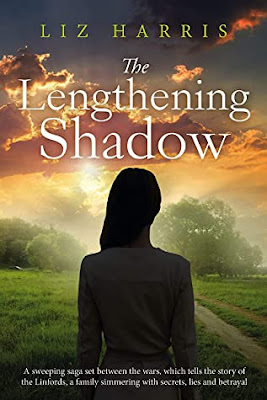 Amazon UKAmazon USAmazon CAAmazon AUGoodreads
Fictional Saga
1930s
England / Germany
The third book in the Linford saga, The Lengthening Shadow is set in the years between the World Wars, partly in England and partly in Germany. Dorothy, a daughter of the successful Linford family, volunteers for nursing duty during the first World War. She falls in love with and marries an interned German student, Franz, to the horror of her family. Disowned, she moves to Germany with him.
Liz Harris gives us some interesting glimpses into the changing social structures of the between-war years, both in England and Germany. Contrasting with the increasing freedom and rights of both men and women in England during this time, as seen through the activities of members of the Linford family, Dorothy’s life in Germany becomes increasingly restricted by the expectations of the National Socialists as they come to power. While the Linfords' life in England, apparently untouched by the economic impact of the Depression, continues in a solid middle-class way, Dorothy learns to be the sole manager of her home in Germany. Everything – language, food, the rhythms of the day – are new to her, but secure in her love for Franz, she is determined to make it work.
This is a quiet book, the larger events of the period filtered through the minutiae of everyday life in a rural German village and the middle-class lives of a successful English family. It takes some time for the true direction of the Nazi party platform to be felt by Dorothy and her family; Franz is an apologist for Hitler, trying to find good in the rules he imposes, and the Linfords are apprehensive for their distant daughter, but not truly worried. Family issues – the direction of the firm, a rebellious granddaughter, an accident – these are their major concerns. Things come, as they must, to a head, the two families reconnecting via an intermediary in a plausible way, leading to the conclusion of the story.
While an enjoyable book, I had several small niggles regarding style and plot. The initial chapters are to some extent grounding the book in both its time and place and its relationship to the other books in the series, heavy on description and explanation. Dialogue is in place a little clunky, as the author inserts world-building details that sound out of place in conversation. Solutions come too easily, without real tension. Nonetheless, Harris evokes both settings well, and the ease with which a distant threat insinuates itself into day-to-day life of a typical German family, until it takes a shocking event to let them see what is really happening, is believably portrayed.
Recommended for readers who like family sagas in a historical setting, The Lengthening Shadow is easily read as a stand-alone novel.
Reviewed for Discovering Diamonds
© Marian Thorpe e-version reviewed