All About 'Betrayal' - Annie Whitehead's Story: Love To Hatred Turn'd

As now becoming 'traditional' here on Discovering Diamonds, we take a break from reviews during December to feature something different - the latter part of the month will be our usual Story Inspired By A Song (and we have some cracking good ones!) But we kick December off with a look at the authors and their ideas behind the anthology of stories in Betrayal...
"Betrayals fester and poison the soul."
George R.R. Martin
Twelve tales by twelve accomplished writers who explore the historical, yet timeless, challenges from post-Roman Britain to the present day... and the bitterness of Betrayal... 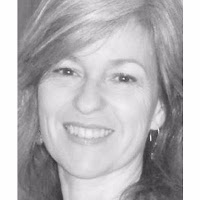 What do Mary Queen of Scots, Edward VI, Henry VI, and Richard II have in common? They were all child monarchs, who each at some point had circling around them a number of adults either acting as regents or plotting so that they could be the power behind the throne. And in this, the ambitions of some of the Anglo-Saxon nobility and, indeed, royalty, were no different.

The Anglo-Saxon era didn’t entirely consist of fighting off the Vikings and/or the Normans. My story in Betrayal focuses on what was happening at court, rather than the battlefield. It records a series of incidents which had repercussions for the monarchy, and even caused ‘England’ to break up again for a while. I explored those repercussions in my novel Alvar the Kingmaker. 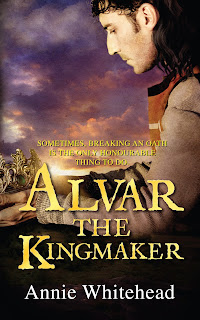 Now, in Love to Hatred Turn’d (my story for Betrayal), I’ve written about the fifteen years leading up to the opening pages of Alvar, to show how much political faction was becoming a major influence on events. I really didn’t have to change any of the recorded history; it handed me a king’s dramatic near-death experience, a politically motivated murder, embezzlement, and the banishment - twice - of a man (Dunstan) who later became an archbishop!

I’d intended to focus on the bride of a young king, but I quickly realised that the story began much earlier, with her mother, Alyeva, who became the main character. And Alyeva, thankfully, forgave my mistake and didn’t berate me, as characters sometimes do.

(Case in point: Oswii, the ‘baddie’ in Cometh the Hour, who always seems to sulk when he’s off stage, and even though he’s contemptible, through and through, he makes me smile at his tenacity. I’m currently writing the follow-up to Hour, and he’s still in a bad mood!)

But back to Alyeva. She’s another one of my characters - like Kata in Alvar the Kingmaker - who’s almost just a footnote in history. She’s barely named in the sources, but the incident which brought her to the notice of the chroniclers was momentous (assuming it happened at all).

She was involved, allegedly, in a sex scandal, and that scandal forms the first scene in Alvar the Kingmaker. She was dismissed as a harlot, as was her daughter, yet in fact her daughter was a legitimate wife of a king of Wessex, and I’ve always thought that she was an innocent, caught up in the power play.

So what was actually going on?

My story covers the period between the death of King Athelstan and the moment when that young girl found herself caught up in scandal. It’s a period of history which includes a powerful dowager queen - the stepmother of Athelstan - who’d had to wait a long time to see her own son on the throne. And it’s a time of history where mothers of kings were powerful indeed. Until, that is, those kings married and had sons of their own…

Alyeva’s daughter has been identified as being descended from Alfred the Great’s brother. It’s thought that Alyeva married into the family, which means that, unfortunately for her reputation, she married into a rival branch of the royal house, one which had cause to resent her and her brood. That side of the family had already risen up once in rebellion and, remember the dowager queen? Well, her father was killed in the battle to put down that rebellion. So she’s unlikely to have been friendly towards Alyeva.

Potential for some animosity at court, certainly. Add to that a series of unfortunate incidents, and by the end of the story we have two contenders for the throne, both grandsons of that doughty dowager queen, but both still too young to rule.

What follows is a story of powerful factions doing whatever they can to ensure that their candidate succeeds to the throne and that they then control the king. And it does seem that they stopped at absolutely nothing. On one side were Alyeva and her children, along with Alvar’s elder brother, and on the other was the powerful Lord of East Anglia (so powerful that he was known as the Half-king) and the abbot who ended up banished for a third time. Each side championed one of the younger princes, and each side ultimately underestimated the determination of those boys to think for themselves.

Betrayal can - and does in this story - take many forms, from spreading lies to murder. It can also come from characters being thwarted by faits accomplis, and this is something which features in my story and in Alvar the Kingmaker, too. The done deal is, I think, especially galling, leaving the victim feeling not only duped, but helpless; its discovery sparks an impotent rage and any revenge must by necessity be slow-brewed, calculated, and therefore it will pack a powerful punch...

I hope those who’ve already read Alvar will enjoy this ‘prequel’ and for those who are new to my writing, I hope it’s a pleasing introduction to my characters. 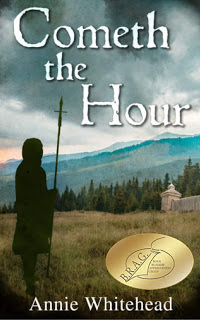 Annie studied History under the eminent Medievalist Ann Williams. She is an elected member of the Royal Historical Society and an editor for EHFA (English Historical Fiction Authors.) She has written three award-winning novels set in Anglo-Saxon England, one of which, To Be A Queen, the story of Æthelflæd, Lady of the Mercians, was long-listed for the Historical Novel Society (HNS) Indie Book of the year 2016, and her full-length nonfiction book, Mercia: The Rise and Fall of a Kingdom is published by Amberley Books. She has contributed to fiction and nonfiction anthologies and written for various magazines, including winning the New Writer Magazine Prose Competition. She was the winner of the inaugural Historical Writers’ Association/Dorothy Dunnett Prize 2017. She has now been a judge for that same competition for 2019 and 2020, as well as for the HNS Short Story Competition. Her second nonfiction book, Women of Power in Anglo-Saxon England, was published by Pen & Sword Books in June 2020. 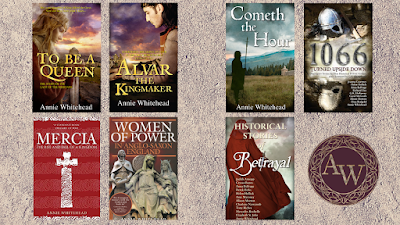 You can find Annie: