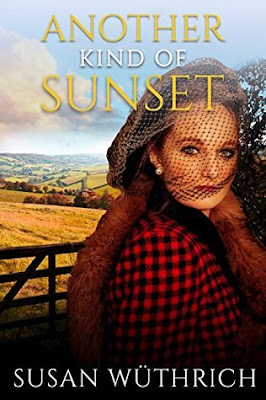 Harry and Eve Pritchard married young. Harry worked at Eve’s parents’ nursery, and if World War Two had not happened they would probably have spent their lives together in the same business. But Harry goes away to war, leaving behind a loving wife and two children, and then a third arrives and Harry is reported missing in action. Eve is devastated, but as she struggles to hold on to the nursery business an Italian widower steps in to help her, and soon she finds herself falling in love again. Luca Fancelli joins her in the nursery then along with her children and his three they set up home together and marry in a register office.

For a short while they are happy together...

The story is told in flashback format after Eve’s daughter, Faith, starts psycho-therapy in 1978. Harry’s story is told through a verbatim transcript translated from German and his subsequent memoirs.

As the book blurb says, Another Kind of Sunset is a saga of two families coming to terms with tragedy, reconciliation and most of all forgiveness. Author Susan Wüthrich has created a convoluted yet strangely credible tale of how war can cause long-term or lingering damage to non-combatants. For the most part I was turning pages to find out what happened next: would there be – could there possibly be – a happy ending? I have to say I struggled somewhat not only with the gruesome content of Harry’s experiences in the Russian gulag, but also with his literary skills. Both his verbatim transcript and his memoirs suggest a man of learning, skilled with words, which I don’t think could have been the case. Nevertheless, Harry’s grim experiences and heart-rending choices are something that could have happened to innocent men or women in wartime.

Another Kind of Sunset is a tissues and chocolate box story for readers who enjoy family sagas and women’s fiction.