The Banished by Alex MacLean 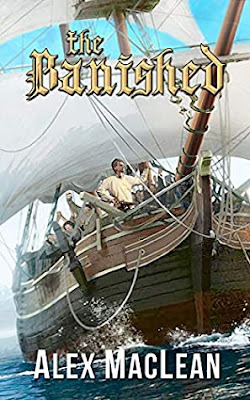 On a late autumn morning in 1755, Isaac Dorion’s entire world explodes. English soldiers descend on his village, and once they are done, not one single building is left standing, the acrid smoke of burning houses painting the sky black. The inhabitants try to flee. It is Isaac’s misfortune that he is separated from his son and wife, and when he sees his young boy taken prisoner by the English he feels he has no option but to give himself up—he cannot let Simon face the terrors of transportation alone.

Prior to reading The Banished, I had never heard of Acadia or of the tragic fate that befell the settlers of this originally French North American colony, sandwiched between New England and Quebec. French settlers arrived early in the 17th century and were, for the most part, well received by the Mi’kmaq, the Native Americans who had lived in the area for several centuries. Conflicts between England and France, between English settlers and Native tribes, between English and French expansionist schemes, tended to spill over on the Acadians, this despite their desire to be left in peace to cultivate their lands.

Mr MacLean brings these heart-wrenching historical events into vivid life, all the way from the despair of a father who sees his young son carried off in one ship while he ends up on another, to the dismal conditions in which the Acadians are held. Isaac does not know if his wife is dead or alive, he has no notion how to save his boy and when he realises that his ship is destined for North Carolina while Simon’s is making for New London, he just wants to die. But when an opportunity arises, Isaac takes it, thereby helping his fellow prisoners perform quite the feat. (What that feat is, I will leave future readers to discover for themselves).

Isaac Dorion is not a complex character—he is a man driven by his need to somehow find what little he has left of his family and keep it safe—but with Isaac, Mr MacLean has given those long-gone Acadians a voice.

Woven through the depictions of the destruction of the Acadians is the equally poignant tale of the Mi’kmaq, a tribe that is slowly being pushed further and further back from their ancestral lands, who’ve been decimated by the smallpox the English have purposefully infected them with, and whose way of life is threatened with permanent extinction. Despite all this, the Mi’kmaq do what they can to help the Acadians who evaded the English, no matter that it puts them all in the precarious situation of not having enough to eat over the coming winter months. Mr MacLean’s portrayal of Nakuset, a Mi’kmaq man who has lost his wife to the English rangers and who is plagued with visions of what the future holds for his people—and a growing affection for Emeline Dorion, left behind when her son and man are carried off—is impressive. So is Mr MacLean’s descriptive prose, painting the beauty and harshness of the wilderness that surrounds his characters, be it the forests of Acadia or the raging seas Isaac must traverse to somehow find his son again.

All in all, The Banished was an excellent read, combining a sequence of historical events with a cast of well-developed characters it was very easy to become attached to.