The Adventures of Tom Finch, Gentleman by Lucy May Lennox 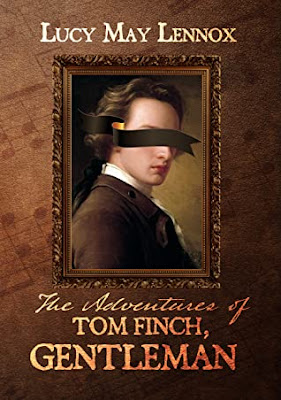 What becomes of a wannabe libertine in early 18th-century London who is continually thwarted in his rake’s progress by his remarkable musical talent and innate decency? Added to these confounding factors, Tom Finch, one of a stable of bastards sired by a poxy earl, has been blind from early childhood. In Lucy May Lennox’s delightful romp through Hanoverian England, The Adventures of Tom Finch, Gentleman, her unique protagonist is one of many characters that at first glance appear right out of costume-drama central casting but stubbornly play against stereotype. And it’s the characters that make this novel such a jolly read.

This is not to gainsay Ms Lennox’s skill in constructing a plot line that provides plenty of interest and pace. Tom Finch has survived through most of his adult life on the largesse of a domineering widowed aunt, Lady Gray, the sister of his noble father who has appointed herself wrangler of her intemperate brother’s herd of illegitimate sons and cast-aside daughters from his first marriage. However, Lady Gray has an insatiable taste for opera and a not unrelated soft spot for her musical prodigy nephew. Her modest largesse, together with Tom’s irregular earnings from writing broadside tunes, tutoring aspiring sopranos, and serving as rehearsal music master for Handel’s operas at the Theatre Royal, allow Tom to maintain a slightly tatty and very jumbled household near Covent Garden’s theatres, stews, and alehouses.

Although he's a voracious and somewhat indiscriminate consumer of the services of the area’s concubines, Tom’s heart resolutely belongs to a notorious prostitute, Sally Salisbury. However, his ill-advised loyalty to Sally is tested when he’s hired to tutor a promising young half-English soprano, Tess Turnbridge, newly arrived under questionable circumstances from Naples and her Italian mother’s family. The remainder of the book is taken up with the intriguing antics of Tom, Tess, Sal, and a memorable parade of extended family members, quirky acquaintances, and opera folk.

Ms Lennox is very adept at deeply immersing readers in the sensory details and social conventions of the 18th century—she plunges us in from the first pages and never lets us up for air. She has both an expansive and nuanced skill with period idiom, as well as a remarkable ability to convey the experience of a blind man in a time before accommodations for sightlessness—braille, service animals—making his way personally and professionally in a sighted world. Her attention to every detail of character and setting allows her to continually surprise the reader with twists in both the behavior and backstory of her parade of memorable personalities.

This is a must read for any lover of fiction, not only of English and/or 18th century tales. Tom Finch is a finely crafted and wonderful book for the general reader as much as the historical fiction devotee. I highly recommend this book.