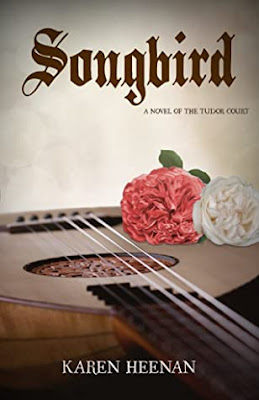 "Bess has the voice of an angel, or so Henry VIII declares when he buys her from her father. As a member of the Music, the royal company of minstrels, Bess grows up within the decadent Tudor court, navigating the ever-changing tide of royals and courtiers. Friends come and go as cracked voices, politics, heartbreak, and death loom over even the lowliest of musicians. Tom, her first and dearest friend, is her only constant. But as Bess becomes too comfortable at court, she may find that constancy has its limits."

I think, perhaps, that the official blurb, above, does not do the book itself justice. It's not that there's anything inaccurate about the blurb, but this book is so much more than what is described on the short back cover blurb! We first meet Bess when, as a young girl, she is taken to court by her father and left there. She's confused, she doesn't understand why she can't go home again and she's more than a little intimidated by having to sing in front of a giant. This giant, of course, turns out to be Henry VIII, and Bess has been sold to Henry so that she can join the King's Music. She's a young girl when this happens, and she's a young woman by the end of the book and so we really do see her grow up at court.

We get a fascinating glimpse of that rich, vibrant Tudor court, and we do get to meet some key players there - as well as the king, we meet Catherine of Aragon, Anne Boleyn and Thomas Wolsey. Bess, Tom, and their friends interact with these people, but the real drama is with the fictional characters, who walk a strange path between members of the court and the life of a servant. It's not a view which is often presented and I found the premise an interesting one.

Tom and Bess' relationship is fraught with difficulties and what I enjoyed was how those difficulties were based on problems which arose from the historical setting. No one here steps out of their period, even for a second. Their attitudes and their circumstances are very 'Tudor', but within that, of course, there is scope for people to behave in very different ways. Bess matures in a believable way, as does Tom. Other characters, though minor, are well drawn: devout, tragic Agnes, Robin, and the minstrel Ewan, all have their distinct character traits.

Bess' younger years are almost like being at boarding school, and she does come to view the court as her home. This is a mixed blessing for her and her dilemmas, longings and regrets felt very real.

Ms Heenan uses the history well, tying in known events, such as the outbreak of the Sweating Sickness, to provide drama for her fictional characters. This too made their travails seem all the more real.