The Last of the Romans by Derek Birks Reviewed by: Alison Morton 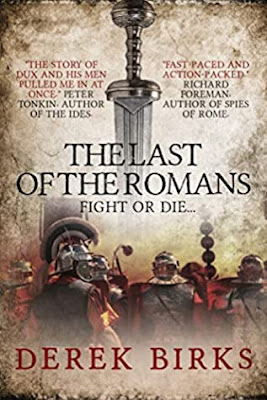 "The pace is strong, the enemies clever and allies uncertain. "

"Dux Ambrosius Aurelianus has served the Roman Empire with distinction. His bucellarii, a small band of irregular soldiers, have helped to bring a fragile peace to the beleaguered empire in the west. But, with the empire now at peace, his master, Flavius Aetius, decides to chain up his dogs of war. Ambrosius and his men are left to idle away their days in a rural backwater, but Ambrosius’ boredom is brutally swept aside when old rivals seize the opportunity to destroy him. Pursued as a traitor by the imperial guard, Ambrosius takes his loyal band, along with other dissident soldiers and a Saxon girl, Inga, into the mountains. Since nowhere is safe, Ambrosius travels north, across the crumbling ruins of the empire, to his estranged family in Gaul. But there too, he finds nothing but conflict, for his home town is now besieged by a small army of rebellious Franks. Freedom and peace seem a world away. Whatever course the soldier takes, Ambrosius and his bucellarii will need to muster all their strength and skill to survive. At the twilight of the empire, they may be the Last of the Romans…"

Readers gripped by Roman novels by Conn Iggulden, Ben Kane or S J A Turney will find much of the same thrill in Derek Birks’ The Last of the Romans.

Ambrosius, the tantalisingly possible model for King Arthur, or at least his ancestor, is a favourite speculative idea. But this war leader Ambrosius, portrayed at the dusk of the Roman Empire, is real in Birks’ novel; tough, uncompromising, persistent, yet under all that ferocity, caring and loyal. Yet he isn’t always rewarded for such qualities; this is not an age of soft interpersonal skills.

Ambrosius, his lieutenant, Marcellus, and freed slave Inga are vividly drawn. Inga is especially well portrayed, but then Birks has always been one of those male writers who can write courageous yet sympathetic women characters. Above all, they are people of their age of chaos, breakdown and instability, but they never fall into stereotypes in this author’s hands.

Researching the fifth century is a deep challenge – sparse and poorly written sources, unreliable narrators and far fewer artefacts from archaeology – yet the author gives us an intelligent interpretation of the period. The pace is strong, the enemies clever and allies uncertain.

The prose and style are very well-crafted. You may find yourself awake at 2 a.m. with this book...