A Discovering Diamonds Review of The Price of Compassion by A.B. Michaels Reviewed by: J.G. Harlond 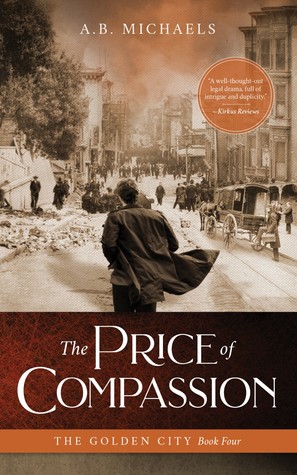 "a very powerful plot and background to a compelling read."

An English barrister, Jonathan Perris, is engaged by wealthy Miss Katherine Firestone to represent a doctor accused of murder. The barrister takes a shine to Miss Firestone, but she is far more interested in the doctor he is to defend in court. And here begins the inter-personal complications and subtleties at the heart of this fascinating novel.

The doctor, Tom Justice, has been accused of unlawful killing by a person unknown after a mysterious, secret event that occurred in the immediate aftermath of the San Francisco earthquake. Unlike just about anyone facing such an accusation, Dr Justice tells Perris that he is unsure whether he is innocent or not. Did he take a man’s life? He says he ‘might as well have because the result was the same’. The deceased was Tom Justice’s cousin, Eli.

After this cryptic remark, and because the doctor will not discuss what actually happened, it becomes the attorney’s job to find everyone connected to the incident and thereby try to decide whether the accused is guilty or innocent. But almost everyone who was present at the mysterious event has either died of natural causes, taken their own life, or disappeared. Unlike many crime stories that begin with an accusation of homicide we do not learn the exact details – the ‘who dunnit/why dunnit’ – until the trial at the end of the story. It is a page-turning strategy, but the plot device here enables readers to learn Dr Justice’s life story so they can decide what sort of person he is before the trial commences.

Chapters about Tom Justice’s humble farming family background and his special relationship with his grandmother, who was a local healer, demonstrate his early life, and his difficult relationship with Cousin Eli. We see how as a medical student Justice sacrifices his personal happiness with a lovely young woman because he knows he will not be able to support her for years to come. The girl marries Cousin Eli instead. Dr Justice graduates Medical School and is offered a prestigious position: he is on track to become a gifted surgeon, but he gives up a potentially glittering future to work in a run-down clinic in San Francisco’s China Town, where bubonic plague is endemic. While a tad slow in places for me, Michaels nevertheless brings setting and characters to life through excellent description and tight dialogue.

How could this good, honourable man come to be accused of murder? To explain would be a massive spoiler; suffice it to say that while success, good-looks and a kind heart are a potent recipe for attracting friends and lovers, they can also engender deep envy and animosity. Add to this the historic mismanagement of an entire city, where corruption is also endemic, and you have a very powerful plot and background to a compelling read.

This is the fourth book in A.B. Michaels’ Golden Age San Francisco series, where she writes fictional characters into real events. It works perfectly well as a stand-alone, and will be of particular interest to anyone wanting to know about past medical practices and theories. I have not read any of Ms Michaels’ previous books but I will be doing so now. Well-written, multi-layered crime fiction – a very worthwhile read for long winter evenings or summer vacations.