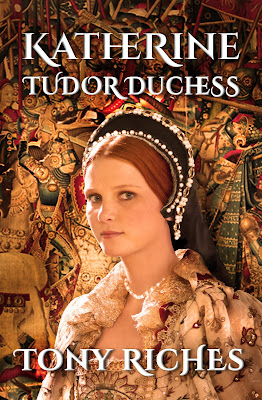 "The characters are wonderfully drawn. From king to queen to servant, each were brought vividly to life, whether you liked or loathed them."

“She stands up for what she believes in...but such courage has consequences. Attractive, wealthy and influential, Katherine Willoughby is one of the most unusual ladies of the Tudor court. A favourite of King Henry VIII, Katherine knows all his six wives, his daughters Mary and Elizabeth, and his son Edward, as well as being related by marriage to Lady Jane Grey. When her father dies, Katherine becomes the ward of Tudor knight, Sir Charles Brandon. Her Spanish mother, Maria de Salinas, is Queen Catherine of Aragon’s lady in waiting, so it is a challenging time for them all when King Henry marries the enigmatic Anne Boleyn. Following Anne’s dramatic downfall, Katherine marries Charles Brandon, and becomes Duchess of Suffolk at the age of fourteen. After the short reign of young Catherine Howard, and the tragic death of Jane Seymour, Katherine and Brandon are chosen to welcome Anna of Cleves as she arrives in England. When the royal marriage is annulled, Katherine’s good friend, Catherine Parr becomes the king’s sixth wife, and they work to promote religious reform. Katherine’s young sons are tutored with the future king, Prince Edward, but when Edward dies his Catholic sister Mary is crowned queen. Katherine’s Protestant faith puts her family in great danger - from which there seems no escape.”

I am not, usually, a Tudor fan.  I often think that publishers do not realise that there are quite a few other periods for authors to write about, but I had heard quite a buzz on social media  about this particular author, Tony Riches, and as this novel seemed to be a little different from the norm I offered to read it.

And how glad I am that I did!

This is a totally engrossing novel of someone I didn’t even know had  existed. Katherine Willoughby’s story is that of a remarkable woman who faced danger and hostility when the balance of power changed – and changed again – and depended on whoever wore the crown, or which person (in the case of Henry VIII, which wife) was in or out of favour. Life and survival, which God to worship, Catholic or Protestant, depended on the whim of royal preference. Free will was an unknown quantity during these turbulent times of Tudor kings and queens. (To be fair, during the reigns of several of the Stuarts as well.)

The story spans from March 1528 to March 1557, so there is a lot of ground for Mr Riches to cover – and goodness he does so in style! It is the detail of the writing that impressed me: in the opening paragraph, for instance, where young Katherine is shocked to discover that her recently widowed mother has arranged her marriage,  the line, ‘The leather seat still held the round shape of him [Katherine’s deceased father] as if he had been sitting there only that morning’. It is lines like this that bring the story to a such high standard – the background, the incidentals are so superbly painted.

The characters, too, are wonderfully drawn. From king to queen to servant, each were brought vividly to life, whether you liked or loathed them.

So often reviewers praise a novel for being a ‘page turner’… well, this one certainly is, even if you are not a Tudor fan.