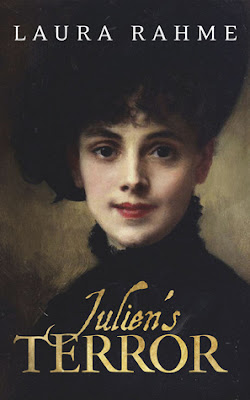 "A dark and complex tale, it describes extreme PTSD, as we know it today; but also it shows how ignorance can inflict its own terror"

That horrendous and inglorious period of French history known as the Terror, which followed the Revolution and the storming of the Bastille, is the scene for the first half of this book.  In Nantes in 1793 it only takes one man – one Citizen - to lead the many into mass murder and destruction, for whatever spurious reason, and for unspeakable crimes to be committed in the name of the rule of law. Against this background, life grinds on in fear and suspicion. Food is scarce, as is conscience. People do what they have to in order to survive; and if that means betraying a neighbour, or falsely accusing another, to protect one's own skin, so be it.

Julien, a child living in Paris, learns the new rules early on. He has a dream of becoming an architect, which seems unlikely when his sole task every day is to buy, beg or steal food. However, he is fortunate to find a supporter, Guillaume, a wealthy man who will sponsor him in his studies, and in the fullness of time he becomes involved in the reconstruction of the city. He marries Guillaume's niece, Marguerite, and before long she is expecting a child.

The second half of the novel deals with Marguerite's own Terror. Far worse than anything that Julien has experienced, the horrors she has witnessed, and lived, with the doomed counter-revolutionaries known as the Chouans in the forests of Brittany and western France, have left their indelible mark upon her.  Knowing nothing of her past, Julien cannot comprehend her behaviour. In an age before the advent of psychiatry, no-one can explain what she is suffering, or indeed how to cope with one who is seriously deranged.

This is a novel of two distinct halves; Julien's narrative is fairly straightforward, and the events of his life simple enough. Marguerite's story deals with the psyche, with the workings of a tortured mind which cannot or will not speak of what it has seen, and which associates wholly with the torment of others. A dark and complex tale, it describes extreme PTSD, as we know it today; but also it shows how ignorance can inflict its own terror and torture, through its own fear.

The Terror, at its worst, is almost all Marguerite's, and the title is therefore a little confusing. Julien has in comparison had a fairly easy time of it, and has made a good living out of the reconstruction of Paris under Napoleon. His ascendancy compares with her descent back into the hell of her memories.

Not an easy book to read, and occasionally it seems to have taken on more than it intended; but it is an interesting study of the effects of the total breakdown of society, of conscience. While it is possible to repair some of the damage done with bricks and mortar, it takes far more to repair the broken mind – if it can be done at all.