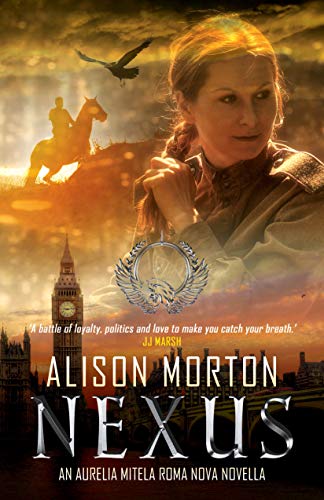 "Rome, the Rome of the past did not survive much beyond the fifth century AD, but Ms Morton has turned that fact totally on its head by creating an alternative present-day world with its people, politics and events."

"Ex-Praetorian Aurelia Mitela is serving as Roma Nova’s interim ambassador in London. Asked by a British colleague to find his missing son, Aurelia thinks it will only be a case of a young man temporarily rebelling. He’s bound to turn up only a little worse for wear. But a spate of high-level killings pulls Aurelia away into a dangerous pan-European investigation. Badly beaten in Rome as a warning, she discovers the killers have kidnapped her life companion, Miklós, and sent an ultimatum: Back off or he’ll die. But Aurelia is a Roma Novan and they never give up…"

I rarely get time to become so engrossed in a novel that I read it from start to finish in one go. I made the time for Nexus; even if it had been a full-length novel, not a quick-read novella I would have done so. I confess I know Alison Morton, she is a friend, but that has no significance when it comes to reading a very good, very absorbing and very interesting story.

Set between the novels Aurelia and Insurrectio in the Aurelia Mitela section of Ms Morton's series of thriller adventures, Nexus is an entirely stand-alone read and is as superb, gripping and thoroughly believable as is the rest of the series.

'Believable' is the key word here. The whole background concept for the series is entirely imaginative fiction: there is no such place as Roma Nova, its construction, its history, its people its politics - it's trials and tribulations do not exist. Apart from 'What did Rome do for us?' (roads, sewers, baths, etc.) Rome, the Rome of the past did not survive much beyond the fifth century AD, but Ms Morton has turned that fact totally on its head by creating an alternative present-day world with its people, politics and events. Roma Nova, is a small patch of ancient Rome snugly fitted into today's modern world, complete with its traditional language and customs. A world that is so utterly believable and convincing, I defy anyone to not go looking on a modern map to see where Roma Nova is located.

It is the preciseness of detail that puts the icing on the cake for these novels, and Nexus in particular. From the very first sentence, with her immaculate research and knowledge of army intelligence and tactics, the author brings every scene, every character, every word of dialogue to very real and very vivid life. From the way they dress and speak to the way they fight, every scene is immersed in believability: the training of a young horse, self-defence in a sticky situation, the lurch in the stomach as a helicopter takes off... beautifully written.

Add in the thriller element of the bad guys, the menace of dark shadows, murder and mystery and you get a page-turner of the very highest exceptional quality.