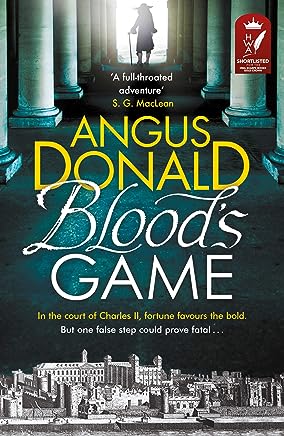 " Donald includes some charming scenes which make the book all the more delightful in the fact that they are said to have truly happened."

Holcroft Blood has entered the employ of the Duke of Buckingham, one of the most powerful men in the kingdom after the king. It is here that his education really begins. With a gift for numbers and decoding ciphers, Holcroft soon proves invaluable to the duke, but when he's pushed into a betrayal, he risks everything for revenge. His father, Colonel Thomas Blood, has fallen on hard times. A man used to fighting, he lives by his wits and survives by whatever means necessary. When he's asked to commit treason by stealing the crown jewels, he puts himself and his family in a dangerous situation - one that may end at the gallows. As the machinations of powerful men plot to secure the country's future, both father and son must learn what it is to survive in a more dangerous battlefield than war - the court of Charles II.

The opening chapter introduces us to the boy Holcroft with whom I was enchanted in moments of meeting him. His naïve and unsophisticated view of life is intertwined with the complexities of his idiosyncratic personality and I found myself inadvertently spellbound - a likeable lad right from the start.

There are many layers to this book: the descriptive scenery, the development of the main characters, the supporting actors and the twist and turns of the plot.  Donald makes the most of every opportunity to use humour and through clever intelligent writing creates a vivid picture of the action. I found myself chuckling and sometimes laughing out loud.

For this, the audio version, the dialogue is delivered with aplomb, the accents well-formed and not annoying like some audible narrators who attempt accents they are inept at.

Alongside Holcroft, whom his poor hard-done-by mother calls ‘Holly’, is his father, the charming, enigmatic but utterly inept Colonel Blood, whose fortunes have taken a downward spiral over the last few years, which means he is always on the run with a pack of other utterly useless cronies, neglecting his wife and family of several children. Hers is a tragic story, and probably the more poignant scenes are with her and Holcroft.

After the restoration of Charles II, Colonel Blood emerges landless for choosing the wrong side during the Civil Wars, and acquires a grudge and a desire for revenge against the man who now owns his lands. When the Duke of Buckingham wants him to carry out a mission Blood sees this as a way of exacting that revenge, but manages to bungle the assignment, leading to another mission and yet another bungled mission. He does, however, wangle a place in the duke’s household for Holcroft. Fortunately there is some success for his son whose talents at playing poker and deciphering codes are discovered by his new master. Blood Senior, his life now in danger, has to rely on his younger son’s talents to save him from the hangman’s noose and whilst he languishes in prison, Holcroft is having an adventure of his own.

Along the way, Holcroft meets such real-life characters such as Jack Churchill, Barbara Villiers, and Offra Benn. Donald includes some charming scenes which make the book all the more delightful in the fact that they are said to have truly happened... Holcroft, his father and brother Will are true-life characters whom Donald discovered when he delved into his family history. In combining historical fact and fiction, Blood’s Game makes for a rollicking seventeenth-century adventure, with humorous scenes and a great character-driven plot. The audio is brilliantly performed by Damien Lynch who is a joy to listen to.

I highly recommend this book which is truly a discovered diamond.


Note:
Reviews will now be posted on alternate days, not every day