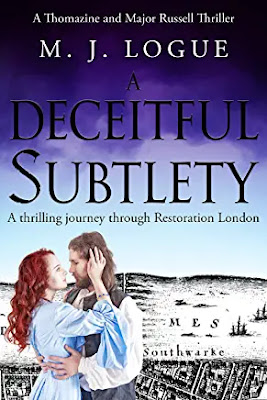 "What I especially enjoyed was the subtle detail of life in 1666 in England and Bruges. Ms Logue has a knack of taking her readers into a time-travel experience - we are there, watching the characters live their lives..."

"Thomzanie and Major Thankful Russell should be enjoying married life. With one teething baby and another on the way, life at the newly-rebuilt house at Four Ashes in the Chilterns is never dull, and they’re hoping to put the debauchery of Restoration London behind them. But then the indomitable poetess Mistress Aphra Behn arrives at their door… Aphra claims to have promised to marry respectable merchant William Scot, who she met on a previous spying mission in Belgium. But he never turned up for the wedding. She’s determined to discover his fate – and she wants Thankful to help her search Bruges. Which may be how married couples behave in sophisticated London society, but there’s no way Thomazine is letting her husband loose on his own with the lovely, flirtatious Mistress Behn. It looks like the couple will once again have to put domestic bliss aside to unravel this intriguing mystery…"

This is the second novel in the Thomazine and Major Russell thriller series, and I loved it. Second instalments in a series are often difficult to write because the momentum has to be kept going and, if anything, the interest in the characters, the plot and the action has to be even more developed ... and A Deceitful Subtlety does this by the bucket-load!

I fell for Major Thankful Russell l when I first 'met' him in Ms Logue's excellent An Uncivil War series created around a set of dubious Parliamentary characters fighting in the English Civil Wars. I say dubious - absolute loveable rogues full of life and character but a proper rum lot! Thankful was a mere nobody back then, but he rose through the ranks and met with his commander's young daughter, Thomazine. Who, incidentally, even as a two-year-old child was delightful.

Now we meet the pair of them these several years later as a married, very much in love couple. Alas, life outside of fairytales never runs smooth and 'happy ever after'. Which is just as well, because if it did we would not be having the opportunity to become emersed in Ms Logue's wonderful tales as there would be little for her to write about.

What I especially enjoyed was the subtle detail of life in 1666 in England and Bruges. The food, the clothes, the travel, the living conditions - well, everything. Ms Logue has a knack of taking her readers into a time-travel experience - we are there, watching the characters live their lives and deal with problems as they arise. Thankful I could have shaken at times for his uncertain shyness. Thomazine is a wonderful character. Thank you, Ms Logue, for creating her.

I also hadn't realised until I had finished the novel (which I read in one sitting as it was too compelling to put down) that Aphra was a real person from history. She really was a spy. Since reading this novel I have met her in another novel - interesting that both authors had made her very different as a person. I preferred Ms Logue's interpretation, however.

So to sum up: a delight of a romp. Super characters, well written, thoroughly enjoyable. More, please...