Him Or You by N L Collier 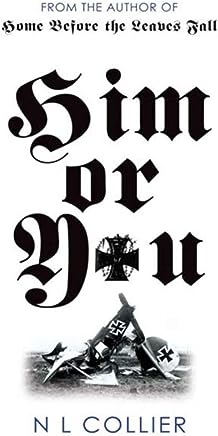 "What this book does so wonderfully well is to place the reader into the squadron alongside these men. Through Franz's narration, we watch as they all struggle to cope with the pressures by drinking heavily when weather precludes any flying or they have finished for the day."

This is Book 3 in a series and I would say from the outset that it is very advisable to read the first two in the series as I have. The reason being that this carries on directly from Book 2 (Below Us The Front) which in turn follows Book 1, Home Before the Leaves Fall and it would be very helpful to know the main characters.

Franz and Kurt, together with Kurt's brother Johnny, have been friends for years. Franz and Kurt had both served in the trenches before becoming flyers. And this is where we pick the story up in this volume. Their job is simple – shoot down as many 'Tommies' as they can and especially the Observer planes, which are always accompanied by at least two fighters.

What this book does so wonderfully well is to place the reader into the squadron alongside these men. Through Franz's narration, we watch as they all struggle to cope with the pressures by drinking heavily when weather precludes any flying or they have finished for the day. They drink (and utilise the local brothel) because they know they may not see another day. The turnover of pilots is rapid and each one of them knows their days are numbered. Both Karl and Franz suffer from nightmares of their times in the trenches, but they are not the only ones. Watching their fellows die becomes a regular occurrence and their biggest fear is from burning; this haunts Franz particularly.

Karl is a hotshot and is soon an 'Ace' – one who has shot down five enemy aircraft – and this causes traces of jealousy from his elder brother Johnny. Karl is calm, a fatalist; Franz is steady without being spectacular. And for the first time, the author explores the relationship between the two …

I found it impossible not to be moved by the characters – even the minor ones – and although the passage of each day is pretty much the same for them all, the author handles this extremely well without ever making the reader feel bored.

Books on the horrors of World War I are plentiful, though very few deal with the state of the war in the air. This one takes on the task and succeeds magnificently.

Very highly recommended by this reviewer