A Discovering Diamonds review of ALTDORF: THE FOREST KNIGHTS by J K SWIFT 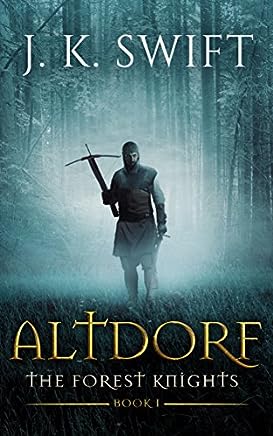 "I enjoyed this book; the action is pretty much non-stop and the characters, especially Thomas, are well structured and thought out."

All Thomas wants is a quiet life. He and his companions have been at war in the Holy Land for nigh on thirty years in the service of the Knights of St John. Together they return to their homeland and go their separate ways. Only the giant, Pirmin, remains with him.
.
Thomas has bought a ferry service that crosses the lake for whomsoever needs it and he and Pirmin set about restoring it. Pirmin is a restless character and soon finds good lodging at the local inn, his board paid for by his work on the innkeeper's behalf. Here he meets the outlaw Noll Melchthal, young and charismatic. Thomas will have nothing to do with the fugitive and is now rarely seen in the village. Seraina is a druid priestess with healing gifts and other powers.

Meanwhile, in Hapsburg, Prince Leopold, younger brother of King Frederick, has plans of his own. He intends to build a fortress at Altdorf, near the village, for there will be profit in both trade and tolls for him. All these characters will come together in J K Swift's exciting tale which has its foundations in the (probable) myth of William Tell.

I enjoyed this book; the action is pretty much non-stop and the characters, especially Thomas, are well structured and thought out. One or two little niggles with anachronistic vocabulary that would not have been known in those days, but this did not spoil the overall feel of the book. The ending is complete with no loose ends; nevertheless, there is a sequel and I look forward to reading it to discover what happens next!