I Am Mrs Jesse James by Pat Wahler 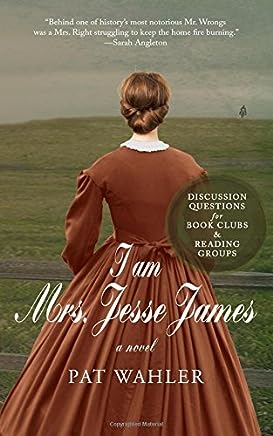 "The everyday details of life in the years following the civil war were expertly drawn, and I learned a lot."

"A penny for a promise will change her life forever. For Jesse James, the war will never be over. For Zee Mimms, the war is only the beginning. The long, bloody Civil War is finally at an end when Zee Mimms, the dutiful daughter of a Missouri preacher, is tasked with nursing her cousin, Jesse James, back to health after he suffers a near-fatal wound. During Jesse's long convalescence, the couple falls in love, but Jesse's resentment against the Federals runs deep. He has scores to settle. For him, the war will never be over. Zee is torn between deferring to her parents' wishes and marrying for security or marrying for love and accepting the hard realities of life with an outlaw living under an assumed name and forever on the run. For her, the choice she makes means the war is only beginning."

The premise of this book intrigued me, because what do we really know about the wives and lovers of these famous, or should I say notorious men? The tale begins with a funeral, and yes, it is Jesse James himself who is being laid to rest. That's hardly a spoiler, given that most people with even a passing interest will know the nature of his death, if not all the details.

Immediately though, we are invited to wonder about Zee, his widow. How did they meet; how did her life's journey lead her to this day? The opening pages are a strong start, while the first few chapters do go a bit slowly. But there is a very good reason for this, because we need this slow start to show two things: firstly the fact that Zee nurses Jesse and this is how their relationship builds, and secondly because it presages what is to come - years of patient waiting on her part while Jesse is away, doing what he does.

The story is punctuated with sudden bursts of drama, which are well written and show the contrast between the fairly ordinary life which Zee lives and the adrenaline-fuelled existence of her husband. I didn't know the exact details of his life and death and so much of this was a revelation to me, and all the better for it.

The everyday details of life in the years following the civil war were expertly drawn, and I learned a lot. The book is written in the first person, which I normally don't like, but Zee is not given to introspection so it was less of a problem for me than normal. With minimal fuss, Ms Wahler draws family characters and relationships which endure over the years and the story is all the stronger for it. I thoroughly enjoyed it.

When Zee yearns for a normal life, I found myself rooting for her, even though I knew she'd never have her wish granted. The ending was a genuine shock, because I'd been lulled into watching a gentle domestic scene unfurl. This was masterful writing. After I'd finished the book, I looked up Jesse James and his life and found that the extraordinary details chronicled in the book are all true. What was really poignant was seeing photos of his mother's farm, and photos of both Jesse and Zee.

A strong book, which exerted quite a pull on me as a reader.