A June Novel Conversation with Ulfus and Richard Tearle

To be a little different for our brief June Break

The character of our guest author today, Richard Tearle, (our senior review editor) is not yet in a published novel - Richard is working on that issue though!

Q: Hello, I’m Helen the host of Discovering Diamonds Novel Conversations, please do make yourself comfortable. Would you like a drink? Tea, coffee, wine – something stronger? You’ll find a box of chocolates and a bowl of fruit on the table next to you, please do help yourself. I believe you are a character in Richard Tearle's novel entitled 'Ulfius' Would you like to introduce yourself? Are you a lead character or a supporting role?
A: Ale, if you have some, Lady. I am not familiar with these 'chocolates' – some form of confection are they? Thank you. My name is Ulfius. I had the privilege of serving three kings – Aurelius, Uther and his son Arthur. I would like to say that I could count them all as friends as well. I suppose you could call me the lead character but it is not all about me.

Q: What is this potential novel about?
A: Mostly it is about restoring Uther to his rightful place – the kingship of Britain. I have heard that much has been written about his son Arthur– most of it untrue – but very little of his father. Uther had many good points, but his passions led him in all things. To raise an army to match that of the tyrant Vortigern was a great achievement and the struggle to keep his kingdom even greater.

Q: No spoilers, but are you a ‘goodie’ or a ‘baddie’? (Or maybe you are both!)
A: No man is completely good. Nor completely bad. I did what my king ordered and there were some things I regretted but I would like to think that my loyalty was never in question.

Q:  Tell me about another character in the novel – maybe your best friend, lover or partner … or maybe your arch enemy!
A: That has to be my wife, Ioena. I bought her as a slave from that old rascal King Mark! But I loved her from the moment I first met her. She calmed me when I was angry, brought sense to my obstinacy and was ever my lover and best friend.

Q: Is this the only novel you have appeared in, or are there others in a series?
A: This is my only appearance. I would feel reluctant to appear in any others. I was a soldier and I did my job as best I could, but I was never one for ceremony and accolades.

Q: What is one of your least favourite scenes you appear in?
A: There are two, but this first is not really a scene but a simple confession. It involves the only time I was unfaithful to Ioena. The other was my unexpected presence at the birth of Arthur; what poor Igraine went through, being cut open to free the babe and her subsequent death haunts me even now. Witnessing violent death in battle was an everyday occurrence to me, but that …..

Q: And your favourite scene?
A: (winks and smiles) You mean apart from my what I believe you term 'love scenes' with Ioena? Ah – then I think it is the pride I felt when taking our son Uthew into battle for the first time and how he obeyed me completely and was instrumental in our victory. But pride has its consequences, you know; Ioena did not approve and we had our one major argument over it.

Q: Tell me a little about your author. Has he written any other books?
A: My author has yet to be published and this would be his debut novel

Q: Is your author working on anything else at the moment?
A: He has, I believe, many ideas but I fear he lacks confidence. I have seen some scribblings he has made, however.

Q: How do you think authors, such as your author, can be helped or supported by readers or groups?
A: Oh, readers can be so helpful to authors in terms of promoting their work, especially if they have enjoyed the tale. If they pass on their comments it is a joy for the author to see that their work is appreciated. It does wonders for their confidence, you know.

H: Thank you Ulfius it was a pleasure talking to you. Would your author like to add a short excerpt? And while he is doing that… would you like a refill of that ale…?

U: Thank you for inviting me into your home, Lady. And, aye to more of that ale ...

(Ulfius has been charged with overseeing the claims of all who feel entitled to be named High King following the death of Uther. Each candidate had stated their case and it was left to a panel of Lords to make the decisions).

After two days of deliberations, it was time, they told me, to inform all of their decision.
I breathed a sigh of relief, for at last it would be over.  Yet I felt a knot in my stomach. Well, this part of it certainly would be over. But what of Myrddin? Would he make his appearance – as Morvan suggested – at the last possible moment? I had left orders for my men to guard the entrance to the hall, but a quiet word with Afer ensured that Myrddin and any with him could be admitted. He understood and he knew Myrddin of course.
I organised the candidates as best I could for they were all naturally on edge and eager to hear their name called when the announcement was to be made. There were those who thought that sitting in the middle was tantamount to being the favourite and that being nearer to either end designated that person a loser. I put it to them that lots would be drawn and the seating arrangements decided thereby. After some heated debate and comments, they agreed and I proceeded. Ironically, Lot drew the centre and most prominent seat that he felt should have been his by automatic right. I shook my head in despair and exasperation: the lure of power was so great.
When all were settled, I opened the door that led to the chambers where the judges – if that be the right word – had been secreted away from all ears and eyes.
I led them in. They took their seats, each one of them bearing a solemn face, but I remained standing. “My Lords,” I began, “you have reached a decision upon which you are all agreed?”
Malaguin inclined his head and said simply, “Yes, Lord Ulfius, we have.”
“One of which you are all agreed? Every one of you?”
“Yes. We are unanimous.”
I took a deep breath. “Then may we please have …  ”
And that was when Myrddin entered.
As agreed,  Afer called out loudly, “Lord, I tried ... ”
I waved him silent and spoke to the sorcerer. “Myrddin? What brings you here where you have no business?”
He ambled forward. Behind him Gahen and one other followed.
Arthur. 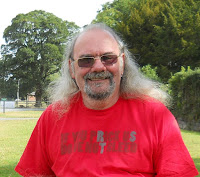 Novel Conversations, in conjunction with Indie BRAG appears on Helen Hollick's Blog Let Us Talk of Many Things on the first Friday of every month, showcasing a variety of Indie authors and their characters