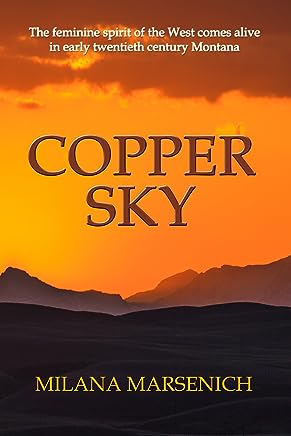 "I rarely read a book which so completely captivates me as this one did. I felt immersed as if I inhabited the world I was reading about."

"Set in the Copper Camp of Butte, Montana in 1917, Copper Sky tells the story of two women with opposite lives. Kaly Shane, mired in prostitution, struggles to find a safe home for her unborn child, while Marika Lailich, a Slavic immigrant, dodges a pre-arranged marriage to become a doctor. As their paths cross, and they become unlikely friends, neither knows the family secret that ties them together."

I rarely read a book which so completely captivates me as this one did. I felt immersed as if I inhabited the world I was reading about. Ms Marsenich writes lyrically, intelligently, and explores deep human emotions. The backdrop of the mining town of Butte at the turn of the last century is evoked in all its grim, toxic detail. Here are the lives of ordinary men and women whose daily task is sometimes simply to stay alive. The main focus is on the two women: Kaly, who is haunted by her childhood and seeks escape, and Marika, an immigrant, who also wishes to plot a different course through life. Something links these two women and it is not immediately obvious what that connection might be. I guessed, and nearly got it right, but not quite.

The blurb says that they live opposite lives, but I think there are many parallels, and it is clear that at this time in history, especially in a town like this, there were few choices for women. The book is atmospheric; danger lurks on every corner, and there is a pervading sense of menace, not just from the mines which belch fumes and collapse in on the miners. The women do what they can to survive and the men contemplate leaving to fight in the war because they see this as an escape. In theory, this should be a relentlessly exhausting and depressing tale and yet it is not, because also sewn through the fabric of the story is hope. I simply had to keep reading because I was so invested in the characters. The pacing is wonderful too; every so often, at appropriate points, we are taken back to the past, and each time we are told just a little bit more of what happened. This was masterful story-telling, and I wondered how it would all end. Often such stories end abruptly, being wrapped up too quickly, but here the ending came at the right place, after a dramatic scene based on real events. Satisfyingly, even the cameo characters have their stories rounded off, not always happily, but at least we learn what happens to them. It adds to the sense that all the inhabitants of this place are connected, whether they wish to be or not. There is a lot of symbolism and it's used to good effect: the weather, the murders which take place, showing how fragile life can be, and the sense of suffocation, both real and emotional. After I'd read the book I did a bit of reading up on the history of Butte and found a photo taken around the time of the book's setting. It looked exactly as I had imagined it.