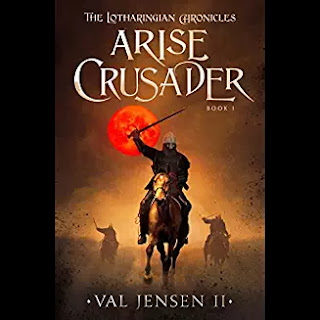 "Arise Crusader is something different for it deals mainly with The People's Crusade led by Peter the Hermit."

Books about the Crusades are pretty common, but usually deal with the exploits of Richard I of England. Thus, immediately, Arise Crusader is something different for it deals mainly with The People's Crusade led by Peter the Hermit.

Anseau is a teenage boy, proud of his father who had fought at Hastings. He is strong and brave but a little headstrong. His love for a young Jewish girl, Channah, threatens to split both of their families. Following an incident with a local lad, Anseau is taken into the service of Bishop Roger with the intention of becoming the Bishop's representative and scribe. Anseau passes all the tests planned for him and is sent to join Peter the Hermit's Crusade and send reports back to the Bishop.

He travels with the army and witnesses some terrible events; meanwhile Channah's family have been forced to flee their home with other Jewish families, not helped by the fact that she is carrying Anseau's baby. When her family are killed, Channah makes her way back to Anseau's family and she and her new son are engaged by Bishop Roger who is planning to go himself to Constantinople.

There are some really good cameo appearances: Emperor Alexois and his Chamberlain, Basil; a crafty German Mercenary as well as a good insight into Peter himself.

There were, unfortunately, some typos and a few odd turns of phrase that have crept in but they don't really damage the writing or the splendid amount of research that the author has put in. This is the first in a series and the cliffhanger ending left me wanting to read more from this promising début author. Cracking cover, too!

Recommended, especially to those who may be interested in this period covering the early Crusades.