THE SHARPE NOVELS OF BERNARD CORNWELL
by Richard Tearle 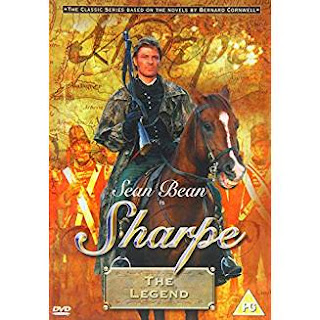 Richard Sharpe. There can't be many who don't get an immediate visual image of Sean Bean in torn uniform, dark powder marks on his cheeks and then stopping to look behind him as he rides from one victory and on to another adventure.

Sean Bean may be the man who is most associated with the character, but Bernard Cornwall is the man who created him. Set during the Napoleonic wars, Sharpe is a soldier, a rifleman, a sniper and skirmisher in a time when muskets were the preferred weapons and therefore Sharpe is at the very front of the battle.

It's formula writing at its very best: at some point in every book Cornwall has to give a brief explanation of the relationship between Sharpe and his comrades, how he got promoted or his beginnings in the rookeries of London. But more of that bit later.

Every book produces a bitter enemy, mostly in the opposing camp, such as Guy Loup or Phillipe Leroux, but he has equally deadly foes much closer to home, most notably in the form of Obadiah Hakeswill and Sir Henry Simmerson. And there is always Ducos, the French Intelligence officer.

Almost by accident, Sharpe comes to the notice of Wellington himself (in fact, Sharpe saves his life) and is promoted 'in the field': “You did me a good turn, Sharpe, and now I'm going to do you a damn bad one.” For rising from the ranks was almost unheard of and Sharpe experiences enmity and jealousy from almost all: the officers despise him because he is not 'a gentleman' and the common soldiers because Sharpe is clearly 'above his station'. He is assigned to command a small company of men of the 95th Rifles – a fictional company which is later attached to the equally fictional South Essex Regiment commanded by Simmerson.

The books cover the years 1793 to 1821, enabling Cornwall to place Sharpe at every major battle or event during that period, including both Trafalgar and Waterloo! I believe there is a precedent here, which makes Sharpe one of possibly only two men to have been present at both battles. The books, however, were not written in chronological order – a deliberate decision by the author – yet each one can be read independently without making the reader wonder about the past. Each novel of the 24 (so far) has a snappy two word title of which one of the two words is always 'Sharpe's …' 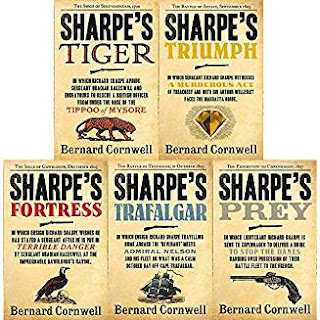 With the intent of only writing about eight or nine Sharpe stories, enter Sean Bean. There can be no doubt about Bean's ability to play the part: a man's man, tough, ruthless and single-minded. Yet something was wrong! As previously noted, Richard Sharpe was a Londoner, a cockney Londoner in all probability and Sean Bean a confirmed and proud Yorkshireman. I doubt few of us fans would have cared too much about this anomaly, but not so Mr Cornwall: in view of the success of the TV programmes he relocated Richard Sharpe to Yorkshire at the age of about 15. That, I think, illustrates the esteem in which he holds the actor. 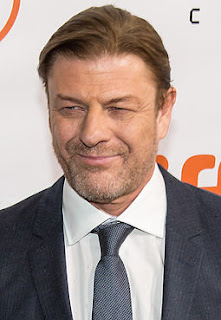 So far I have hardly touched on the regular characters n the books. Always beside Sharpe is Patrick Harper. Despite a bad start, the two soon become inseparable and Sharpe presents Harper with his signature six-barrelled Navy gun. Members of Sharpe's company come and go – Isiah Tongue, a bible sprouting man with no known background; Daniel Hagman, ex-poacher from Cheshire, musician and purveyor of home remedies, “Paraffin oil and Best brown paper...” Former teacher, drunk and debtor Harris is the brains of the company – he can  not only read, but read and speak French as well! Young Ben Perkins was a drummer boy, but became a Chosen Man when he shot the man attempting to shoot Sharpe. But one of my favourites is Francis Cooper whose former occupation was 'dealing in other people's  property'. Cooper  has a dry, cynical wit and an answer for everything, but he also delivers one of the best lines in this or any other series: “It's hard to trust a man who wants to borrow your pick-locks ...” 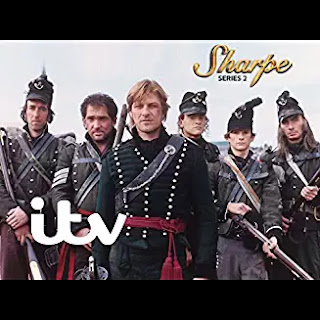 Of course, being the strong, handsome, no nonsense hero that Sharpe is, there is no shortage of women for him. From the feckless and faithless Jane Gibbons to the love of his life, Teresa Moreno, Sharpe's tally of bedpost notches mounts up, including the beautiful Lucille who was the fancy of his friend, the battle scarred 'Sweet' William Frederickson.

The Sharpe stories are not just random adventure tales: the situations may be contrived, but the action is very real, excellently researched and wonderfully told. We really do get the feel of Badajoz, Salamanca and the horrors of Waterloo. Nor are any of the characters weak. Not one of them. Every man and woman has their place, their role to play whether that be to help and support Sharpe or to hinder him and try to engineer his demise. There are far too many to mention in this short appraisal, but amongst the more memorable are Lennox, the inspiration for Sharpe's Eagle, Ross, Nairn and Hogan (Wellington's spy masters who invariably involve Sharpe in their schemes),   William Lawford and so on. Cornwall follows the expected route of incompetent, foppish officers and low life soldiers: “Our army is composed of the scum of the earth...” Yet not all officers are so drawn by the author, nor all common soldiers either. Many, more often in the former category, are portrayed as brave and loyal men, real men with sympathies and passions, a clear sense of duty despite the orders of those who should know better.

So, at the end of the day, we have a massive series of books which can be read individually or in chronological order. We have heroes and villains, rivalries and friendships, great deeds and cowardly acts, love and hatred. Above all we have history and a wonderful insight into what life in the British army was probably like in the very early part of the 19th Century.

And, if we have seen the TV series or the ensuing DVDs, we have John Tams beautiful rendition of an old folk song with its simple but telling line:

“King George commands and we obey, Over the hills and far away...”