A Discovering Diamonds review of A Man of No Country Philip K. Allan 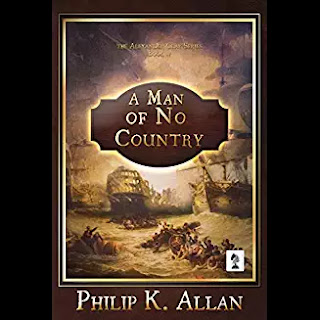 "This is the fourth in the series, and as with the previous three, the action doesn't let up."

"In 1798, the Royal British Navy withdrew from the Mediterranean to combat the threat of invasion at home. In their absence, rumours abound of a French Army gathering in the south of France under General Napoleon Bonaparte, and of a large fleet gathering to transport them. Alexander Clay and his ship, Titan, are sent to the Mediterranean to investigate. Clay verifies the troubling rumours but is unable to learn where the French fleet and the army will be heading. When Admiral Lord Nelson arrives from Britain with reinforcements, Clay and Titan join Nelson’s fleet heading for Southern France. But on their arrival, they discover Bonaparte’s fleet is gone, and Nelson, aware of the dangers of an ambitious and ruthless general, orders an all-out hunt for Bonaparte’s armies before it is too late. As the Titan searches for Napoleon’s forces, another threat has already gained passage on the ship. After engaging and destroying a Russian Privateer, the crew capture a mysterious stranger, claiming to be an English sailor who has been serving from childhood on Barbary ships. Shortly after he joins the ship, there begins a rash of thefts followed by the murder of another sailor. With the officers baffled as to who is behind this, it falls to Able Sedgwick, the Captain’s coxswain and the lower deck to solve the crimes."

Continuing this series of exciting nautical romps, Captain Alexander Clay has finally married, but as often happens in novels (and the Royal Navy!) our hero's nuptials are cut short by the call of duty. Titan, his frigate, is ready to sail, but not, as Clay expects, to join the Fleet in the English Channel. His orders are to sail for the Mediterranean. During the voyage various adventures occur -  pirates are involved, a Russian sloop - but to say more will mean spoilers!

This is the fourth in the series, and as with the previous three, the action doesn't let up, from the somewhat horrifying depiction of a Barbary pirate attack, (not suitable for the squeamish!) to the events that we now know as the Battle Of The Nile. Action, battles, the nitty-gritty of life at sea are all there, but Allan also has the ability to insert humour into his novels - I thoroughly enjoyed the scenes where Clay met Lady Emma Hamilton!

Allan is a superb writer, his nautical details and sea battles are very well done,
and readers who enjoy the more well-known Patrick O'Brian novels may well find this series to  rank alongside Captain Aubrey's adventures.