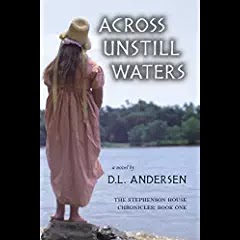 "To read a book that contains no kings, queens, battles or speculations about true events is a rare pleasure."

To read a book that contains no kings, queens, battles or speculations about true events is a rare pleasure. Apart from some dialogue regarding the merits and demerits of whether Adams or Jefferson is the 'better man', Across Unstill Waters adequately provides that relief.

The book follows two people in the backwoods of Ohio Territory in the 1790s. The first is a young girl, about eleven years of age, Lucy Swearingen, one of a number of Swearingen siblings and an heir to the vast lands the family has acquired. The other is Benjamin Stephenson, a long time family friend upon whom they all seem to rely on.

Lucy is different from other children; she is bright, intelligent and prone to dreams that haunt and confuse her. At one point she is able to speak French quite fluently despite having only a rudimentary command of the language and at times she lapses into languages that neither she nor anyone else can understand. Ben, we suspect, has a bit of a past but refuses to speak about it.

When one of Lucy's elder brothers dies of a fever, there is a question of his will and suspicions fall on Ben that he has in some way manipulated events to his favour. Some even think that Ben may have murdered him. Meanwhile, Lucy's stepfather, John Newhouse, is cruel and manipulating to the point of attempting to arrange a marriage between Lucy and a hated rival for control of the lands she will one day inherit. When Lucy's brother Van – a few years older than her – discovers some errors in their stepfather's accounting, the two decide to run away to their uncle in Pennsylvania, taking their little brother Tommy with them.

Mixed in with all this are the legacies of the Indian wars, a legendary figure known only as Blue Jacket and an itinerant preacher who also is not quite what he seems.

Despite the beautifully atmospheric, authentic-sounding descriptions and superb dialogue, I found this a little long-winded to begin with, and the action there a tad slow but when the children ran away I sat up and started to care about their fate.

My e-book review copy had some formatting errors – the text wasn't fully justified – and there were one or two typos.

But in summing up; stick with it because the pace really picks up  from about half way through. I am sure it will interest many readers – especially in the US – who wish to know more about the settlers who were beginning to open up the country, their everyday life, customs and beliefs.