A Discovering Diamonds review of Echoes Down the Line by David J. Boulton 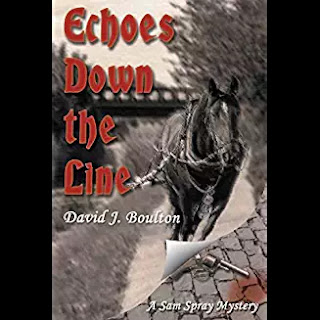 I’m going to go out on a limb here and say that the author is a former railway man. His knowledge of railway jargon and the workings of trains and railway procedures is phenomenal. Of course, it is possible that he spent a lot of time on research.

The story opens in Ireland with two brothers who are forced to flee after being involved in an attempted theft of grain that went wrong. Many years later, one of the brothers dies. On the day of his funeral, a dead body is found in the railway yard, which turns out to be the son of the other brother fresh off the boat from Canada. At the same time boxes of dynamite are discovered missing from a rail car.

Enter Sergeant Sam Spray and Constable William Archer. Love interest is in the person of Lizzie Oldroyd who provides lodging and food for the two cops and worries about Sam. Nothing hot and heavy here which suits the period and the story. The most likeable character, however, is an enterprising eleven-year-old boy named Jimmy Allcroft who manages to get in on the sleuthing. Sam loses a few points because of his impatience with Jimmy.

The mystery is put together cleverly and involves Fenians and royalty, and kept me guessing to the end, but it was a little slow moving, and there was just a little too much ‘railway’ in it for my liking. Perhaps inevitably given that the sleuths belong to the railway police, but some rather lengthy descriptions of the movement of trains tended to interfere with my enjoyment of the story.

I do wonder why the cover depicts a horse, as magnificent as he is, pulling a canal barge though. Something railway connected would surely be more suitable? I also feel that maybe the price of the e-book is a little high?

Despite the above, railway enthusiasts will enjoy this story for its detail.