The Mrs MacKinnons by Jayne Davis 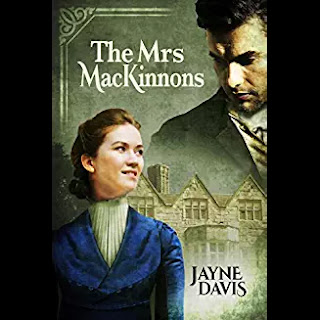 “Major Matthew Southam returns from India, hoping to put the trauma of war behind him and forget his past. Instead, he finds a derelict estate and a family who wish he'd died abroad. Charlotte MacKinnon married without love to avoid her father’s unpleasant choice of husband. Now a widow with a young son, she lives in a small Cotswold village with only the money she earns by her writing. Matthew is haunted by his past, and Charlotte is fearful of her father’s renewed meddling in her future. After a disastrous first meeting, can they help each other find happiness at last?”

Major Matthew Southam, Private Webb and ship’s carpenter Deacon return from war damaged men. Each struggles in his own way and chance brings them, and the starving dog who adopts Matthew, together at Birchanger Hall. The house is neglected and unlived-in since the death of the last owner; it is barely habitable. Someone has stolen the furniture, too.

Much to my surprise I found the way the hall was brought back to life quite as absorbing as the way the men fight their disabilities, interact and integrate with the abandoned estate workers and slowly reach out to others in the village.

Widow Charlotte MacKinnon and her son Davie are instrumental in this transformation, as is Charlotte’s widowed companion, Mary MacKinnon. Well-established in the village of Edgecombe, their lives slowly intertwine with the newcomers in spite of grasping relatives, abusive fathers, thieving labourers, kidnap attempts and not least the hidden dangers of the mantraps installed without permission in the surrounding woods.

There are no Regency balls, no froth and frills in Birchanger; the story is concerned with kindness and getting on with life after seemingly impossible setbacks. The writing is so clean I never really noticed it and the book is long enough at nearly 600 pages for the reader to be truly absorbed in the story and the characters. I particularly liked the character of the small boy, Davie, and how he related to the Major. The idea of learning mathematics by mapping the estate, which he loves doing, is a good one.

It is worth investing some time in this book; it repays handsomely. I was waiting for the villain to be found caught in the one missing mantrap, but.. well no spoilers!.