Miss Blaine’s Prefect and the Golden Samovar by Olga Wojtas 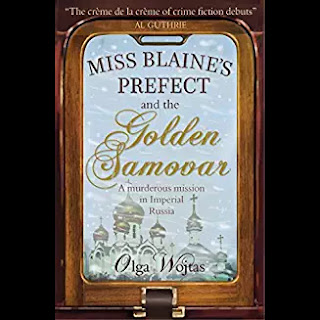 Olga Wojtas is a former work colleague who remains a friend, so of course I wanted to like her first novel. But, while allowing for that bias, this book would have been enjoyable if presented in proof form, with the author un-named. It is smart, funny and engaging, drawing on a considerable range of reference and allusion, but without ever taking them, or itself, too seriously.

Among those references, timely in Muriel Spark’s centenary year, is the Prime of Miss Jean Brodie, which protagonist Shona McMonagle dislikes so much that, in her day job as an Edinburgh librarian, she spirits copies off the shelves and hides them. Herself (like the author) a former member of the ‘crème de la crème’, she is confronted by school founder Marcia Blaine, a time traveller who despatches former pupils on time-bending missions to right wrongs.

Which is how Shona finds herself in nineteenth-century Russia. That she is not wholly sure of the exact nature of her assignment typifies the confusion and incomprehension which run through this story and its humour.

Not least of these is a fine running gag about the year in which she has landed. Shona, while clearly historically literate, is persistently thwarted as she asks to be told, or tries to work out, which it is. The guessing game this creates should keep many readers as happy as Shona is exasperated.

She is sufficiently exotic and baffling to her Russian hosts that a combination of bluff and luck gets her admitted to the high levels of an extremely hierarchical society. But much of that incomprehension is mutual, as she continues to grasp the wrong end of the stick and – given her expertise in martial arts – to contemplate hitting people with it.

Among those she meets, it is particularly easy to warm to Old Vatrushkin -  a family retainer whose Chekhovian nomenclature belies his true age, an educated and intelligent serf who is nevertheless acutely deferential and lives in terror of the possibility of emancipation - and Tresorka, a lap-cum-attack dog first encountered as ‘an animated floormop’.

Linda Cracknell, in a back-cover quote, was put in mind of ‘Anna Karenina written by PG Wodehouse’. And Old Vatrushkin’s intellect has something of Jeeves about it, while the author – who thanks Tolstoy along with Muriel Spark in her acknowledgements –  has a fine ear for wordplay and the telling simile.

All good writers also read, and inevitably take on some influences from their reading. But good writing is also always sui generis. Echoes rarely resound. If they did, Jacqueline Wilson would presumably still be writing the highly competent Patricia Highsmith pastiches of her early days rather than having become a wholly original children’s writer.

There are echoes here, but so too is a distinctive and engaging voice. An author’s note happily hints at ‘future missions’ for Shona. While the challenge will be finding another setting as rich in possibilities as Tsarist Russia, there is little doubt that both Shona and her creator are up to it.