A Discovering Diamonds review of Raven’s Feast by Eric Schumacher 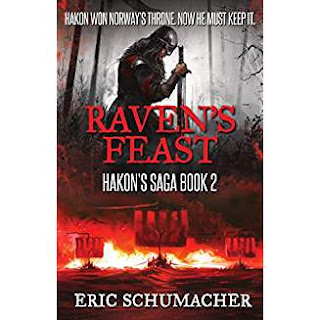 For those who know their Viking history, Harald Fairhair is one of those Norsemen they’ve heard about. Harald was something of a myth already in his own time, and other than dedicating himself to warfare and other such manly pursuits he also found time to make a lot of babies—very, very many babies. Mr Schumacher has chosen one of these babies as his protagonist, namely Harald’s last-born son, Hakon. Very rarely does one come across a book written about Hakon the Good or Hakon Adalsteinsfostre, and as Mr Schumacher points out in his afterword, this may be because we know so very little about him – beyond concluding he must have been quite the forceful young lad, seeing as he was only fifteen when he claimed the Norwegian crown and defeated his substantially older brother, Erik Bloodaxe.

When Raven’s Feast opens, Hakon has just defeated Erik and been acclaimed as king. But bringing peace and stability is not an easy process, and soon enough it seems Hakon’s dreams of a united kingdom will unravel as quickly as a nightmare dissipates at dawn. Other than rebellious jarls and ambitious Danes, there is also the issue of faith: Hakon did not grow up in Norway. Instead, he was raised by King Athelstan and was also baptised a Christian. At the time, Norsemen were mostly pagan so when Hakon expresses a desire to see the land of his forebears embrace Christianity he’s not exactly met by wild applause—rather the reverse, in fact.

Mr Schumacher has used what little we know and filled in the huge gaps quite plausibly, delivering an exciting read about a very young king attempting to hold on to a kingdom cracking wide open. Hakon is an engaging character who does his best to rise to the challenges facing him, a rather brutal coming of age in a world where the might of the sword far outweighed that of discourse and law. Mr Schumacher’s prose is fluid and vivid and the dialogue crisp – if at times very modern. Sometimes, pace flags due to the detailed descriptions of everything from interiors to food, but all in all this is a book that should appeal to all those gripped by Viking fever – and quite a few others as well.