A tale of love and envy on eighteenth century England's waterways 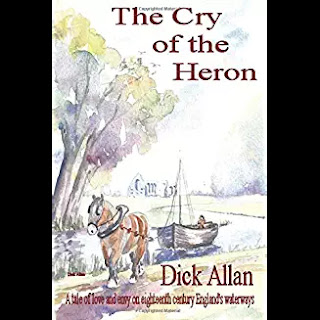 George Cartwright’s father dies after an altercation with Billy, the son of his rival, Nathaniel Cryer. A heart attack was the cause, but Billy finds himself accused of murder and is sentenced to transportation, but is apparently drowned during the sea voyage.

The feud between the two families expands as the Cartwrights do well for themselves while the Cryers’ desire for vengeance grows  darker.

Set in the harsh world of the bargemen of the late eighteenth century, the descriptions of river and canal life seem well-researched, depicting the trade and daily life of these water-world highways that were essential to the expanding trade of the industrial revolution.

The story is perhaps a little ‘tell’ not ‘show’ in style, and there were a few clichés and oft-used phrases (‘mind’s-eye’, ‘smouldered with rage’) which are a shame, as I think the author has the ability to be more imaginative with his words, as shown by his delightful descriptions of the rivers, canals, boats and wildlife. And perhaps a run-through by an editor would have picked up the inconsistencies of using fourteen-year-old but 12th Century (twelfth century would have been better).

However, as something a bit different, and for lovers of all things boats, this is a tale worth reading – especially if you happen to be taking a vacation along the backwaters of the English canals.