When characters invade your life

* * *
When Characters Invade Your Life
by Helen Hollick

There are, I have discovered, several authors out there (and I am one of them) who firmly believe that the characters we write about are real. I’m not talking about real people as in those who lived in the past – King Harold II, Queen Elizabeth I and such, I’m talking about imagined, invented characters. Figures who pop into an author’s mind along with the plot and story as a whole.

It is the fault of these characters I’m afraid. They take over our lives, our souls, our very being – and when we’ve finished writing about them, haunt us through day and night, whispering in our subconscious to ‘write something else about me’.

When I wrote my Arthurian Pendragon’s Banner Trilogy (over twenty years ago now!) I fell in love with Arthur; after all, for over ten years I had worked on what was eventually to become The Kingmaking, the first book in the series. I knew that man better than I knew myself! He was a friend, a confidante, an inspiration – almost a virtual lover at times. He was also irritating, annoying and a darn nuisance, especially when I had run out of steam and hadn’t a clue what to write next, or the confidence to do so. 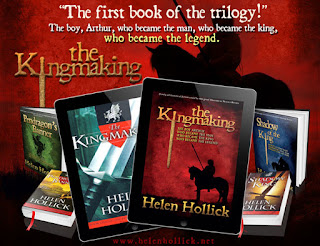 But he would be there nagging away in my right ear. ‘Write. Write more. Keep writing,’ and the image of a scene would come into my mind – almost like watching a movie, then I’d write furiously until I had the scene right.

Read the full article HERE
and maybe leave your own thoughts
and comments?