A Discovering Diamonds Review of EDITH FAIR AS A SWAN by James M. Hockey 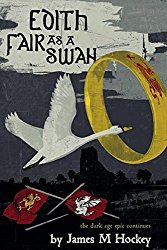 Although part of a series, this novel is an entire stand-alone tale.
Bowdyn the Gleeman, is a storyteller. We meet him in a small village in 1687 telling his tales of hope and encouragement, and this tale of his is of Edith, the hand-fast wife to King Harold II, he of 1066 fame.

Bowdy tells his story, however, through the cripple, Edmund, whose village was destroyed by the Normans. Edmund escaped and met with Edith, who in turn is being sought by King William because he needs to know where she buried King Harold, her husband, in secret, having duped William on the battlefield by not identifying the correct body to him.

The pair of them, Edith and Edmund, flee into Wales, north to York and then to Ely, where Hereward helps them escape to Scandinavia. Our Gleeman’s - and the author’s – story is beautifully descriptive and partially based on fact. Edith did, indeed, disappear after that famous battle at Hastings, and her daughter, Gytha, who also appears in this tale, did marry a Prince in Eastern Europe and the certainty of King Harold’s actual burial place remains an unsolved mystery to this day. I would query whether Edith was called Queen, however, as she was not Harold’s ‘official’ wife. I also think more striking covers would compliment this series, even so, these small nit-picks do not detract from an excellent story - or an excellent series.