THE JESUIT LETTER by Dean Hamilton 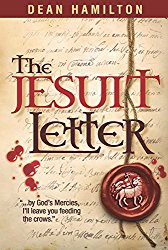 This title was shortlisted for the February Book of the Month

Dean Hamilton’s debut novel, The Jesuit Letter, is the first in what promises to be an absorbing and entertaining series. Accompanied by protagonist, ex-soldier Christopher Tyburn, we enter the Tudor world of the Earl of Worcester’s Men, a troupe of travelling players who are to perform at a little place called Stratford-upon-Avon, where lives a lively young chap called Will, the son of Master John Shakespeare.

Our drinking and gambling Main Player seems to be little out of the ordinary at first, but he soon becomes involved in a dastardly plot concerning the turbulent Protestant v Catholic religious contradictions of the 16th century. Hitherto reluctant to choose sides, he discovers that sometimes sitting on the fence is not an option when survival is – well, a matter of survival.

The author has skilfully blended the reality of Tudor life into his excellent narrative – a nice change to view the period from the perspective of ordinary people, not the Royal Court of Elizabeth I. His setting, the plot, the era, are all very well researched, although maybe the footnotes would have been better employed as an Author’s Note at the end. I am not a fan of non-fiction-type footnotes in a work of fiction. If a fact needs to be explained, then it should be woven into the story. If it is not necessary for the story, it should not be there.

Perhaps a little sluggish to get into gear through the first pages, do read on for the story soon heats up with twists, turns, a touch of humour, romance, and the riddle of the most important part of the plot, the matter of a murder…