A Discovering Diamonds Review of: FORTUNE'S WHEEL by Carolyn Hughes 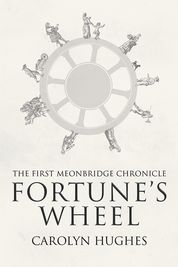 "June 1349. In a Hampshire village, the worst plague in England’s history has wiped out half its population, including Alice atte Wode’s husband and eldest son. The plague arrived only days after Alice’s daughter Agnes mysteriously disappeared, and it prevented the search for her.

Now the plague is over, the village is trying to return to normal life, but it’s hard, with so much to do and so few left to do it. Conflict is growing between the manor and its tenants, as the workers realise their very scarceness means they’re more valuable than before: they can demand higher wages, take on spare land, and have a better life. This is the chance they’ve all been waiting for.

Although she understands their demands, Alice is disheartened that the search for Agnes is once more put on hold. When one of the rebels is killed, and then the lord's son is found murdered, it seems the two deaths may be connected, both to each other and to Agnes’s disappearance."

This novel, the first in the Meonbridge Chronicles,  is set in the fascinating period of England after the plague and explores that world through the typical middle-England village of Meonbridge which has suffered horrible mortalities. This is a clever choice of era and I found the setting fascinating, in particular the way it offered some liberating opportunities to women and to the poor as so many men had been lost that they were required to step up and manage land and, thus, gain more independence. This raised intriguing parallels with WWII that had never occurred to me before and made me think - which I enjoyed.

The novel follows the story lines of various villagers, I found the main characters interesting and engaging and wanted to know more about them and their fate. At the heart of the novel is a neat mystery about the disappearance of the daughter of the central character, Alice, and that, too, kept me reading on to find out more.

I enjoyed the way the villagers’ lives interlinked and felt the plot moved forward convincingly. I did however, feel that, particularly in the first half, the novel was rather densely told with long and slightly repetitive chunks of information and a lack of drama and sparky dialogue. The author clearly has the ability to do this as there were some thoroughly enjoyable scenes, but the slight ‘tell’ not ‘show’ hampered the pace a little in this early part of the story. The very large cast is set out in a list at the start but there were several characters I struggled to remember, even as their stories unfolded. I note that this is intended as the first of a series which is perhaps why there are so many characters, but an abundance of names and people made it quite difficult to become involved in the key story line. The author did hone in more on the core characters as the novel progressed, and I wonder if quite so many were needed at the outset? I also found that some of the stronger scenes ended too soon, just as they were building up some tension, with the author ducking immediate conflict and drama in favour of the longer-term story line which was a shame as both were definitely possible.

Overall this is a promising novel from a debut author. Being set in a fascinating period and centring around some engaging characters - with a bit of polishing, there is potential here for an interesting series. I would suggest for the second novel that the author finds a good technical editor to help iron out the wrinkles. All this first novel needs is a lighter, more 'show' approach to really let it shine. For an insight into a different-to-the-norm period, however, this is a story worth reading as it is obvious that the author knows her period very well.