A Discovering Diamonds Review of: THE FALCON FLIES ALONE by Gabrielle Mathieu 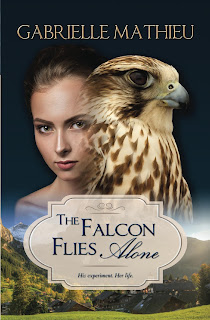 “As the sun rises on a quiet Swiss mountain village in 1957, runaway Peppa Mueller wakes up naked and stranded on the roof of her employer’s manor, with no idea how she got there. As she waits for help, she struggles to piece together fragmented memories of the previous night. Did she really witness the brutal massacre of a local family? Did she kill them? Her fear of sinister house guest Dr. Unruh fuels her panic—as do electrifying flashes of a furious falcon, trapped inside her.
Wanted for murder, Peppa flees the police, intent on finding out if there’s a scientific explanation or if she’s just going mad. Her godfather, world-renowned chemist Dr. Kaufmann, risks his career to help her. In the meantime, Peppa fights her attraction to the handsome priest from India who offers her shelter. With their help, she not only finds Dr. Unruh but places herself at his mercy. His experiments may be the reason Peppa now shares her body with a bloodthirsty bird of prey—but the revenge she plans could kill them both.”

The first of a trilogy, The Falcon Flies Alone is slightly outside the Discovering Diamonds guidelines that novels we review should be set pre 1950. This one, providing the reader is happy to suspend ‘realism’ belief, is good enough to be included as it is a compelling read. Well-paced, nicely set in Switzerland (makes a change from the usual venues!) and a cleverly designed plot makes this a rewarding read. Although possibly more fantasy than history, and maybe a bit too ‘adult detail’ for some readers (drugs etc) but for all that as an adventure into a psychological thriller other-worldly-type first novel of a series, this one is highly enjoyable if you like your history entangled within fantasy. this novel may appear incorrectly formatted on some electronic devices.