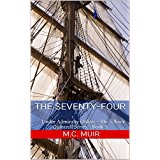 This fifth book of the Oliver Quintrell Series, is a maritime novel in the tradition of C. S. Forester and Patrick O’Brien, set in the same era of the early Napoleonic Wars when the action of the conflict was more concentrated on the sea.

Captain Oliver Quintrell is in Rio with a precious cargo that needs to be brought back to England, a small group of troublesome Irish rebels and a larger Royal Navy vessel to escort back to Portsmouth. The novel follows the events of that voyage.

Muir’s knowledge of ships of the line and the navy of that time is deep and satisfying. Everything feels right and one can imagine that our Captain is friends with Jack Aubrey and sits in Portsmouth docks supping with him while they exchange tales of sea-borne derring-do. The ships fold out from the page like a pop-up; the sea is tangy with salt and the air thick with heat and humidity. We know what the ships smell like, the colours, the sounds. They are the stars of the novel.

This is a very easy book to read as it flows beautifully, the action never lets up, and the detail of the ships and the navy is carefully woven into the narrative while not being intrusive. However, if I had a criticism it would be that the same attention is not given to the people – I can’t picture Quintrell or his first lieutenant Parry, and the two ladies aboard the Perpetual don’t add anything to the story so transparent are they. As this is part of a series I assume that we discovered the physical attributes of the recurring characters in Book One? I wish Muir had added some in here. I defaulted to Russell Crowe and Paul Bettany… A little more care with people and this would be an outstanding piece of fiction. Even as it is, it is a good read especially if you like tall ships and nautical adventure.