We must have at least one Christmas Book for the Festive Season - so for Twelfth Night: 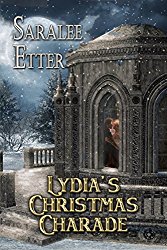 This little book is a novella that will take no time to read, partly because it is rather short, and partly because it bounces along quite happily to its inevitable conclusion. The solution to everyone’s problem is a touch contrived, but in this genre of Regency Romance that is forgivable.

There are no surprises with this novella, you get exactly what you expect, a sweet, romantic tale where the female lead is beset with issues that test her loyalty to a beloved parent and her own beliefs in herself. There is a male sympathiser and a male trouble-maker, and a few females who want to spoil everything.

I think the edition I had could do with a little polish format-wise, but the writing is perfectly accomplished and I think Ms Etter thoroughly enjoyed writing it. It is charming and touching and in places fun. Some of the characters appear in other of Ms Etter’s work and in that respect this will slide in nicely with them as well as being a pleasant read for itself.

Note: this novel may be incorrectly justified as an e-book on some devices