A Discovering Diamonds Review of: BLOOD OF THE WOLF by Steven McKay 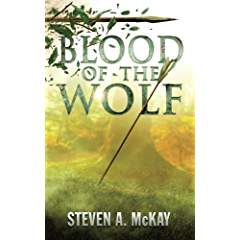 Blood of the Wolf is the final part of McKay’s popular Forest Lord series about Robin Hood. He bucks the trend and sets his in the time of Edward II and the location as Barnsdale Forest in Yorkshire. That in itself is refreshing as the scope for cliché that dogs Robin Hood tales is much reduced.

In this story Robin Hood finds that the tables are totally turned on him – he is the sheriff’s man and he is hunting a band of cut-throat outlaws. The irony is lost on no one. His band has dispersed and has to be collected together in a nice passage and they set off after the outlaws.

This Robin Hood is far from the Lincoln green romantic that we have come to expect. He is not too good to be believed and has an edge, as well as an ability to really rile his wife. He is not perfect, in his work or as a fighter and he does not have it all his own way.

The story gallops on at a great pace that never lets up as we traverse the north of England with him. There is enough back story to make this a decent stand alone novel and McKay writes this so it is not intrusive or trips up the flow. It is a rugged 'boy’s book', including some explicit language, with little delicacy about it... but then Robin Hood in his Hollywood romantic guise should not just belong to the girls, should he?