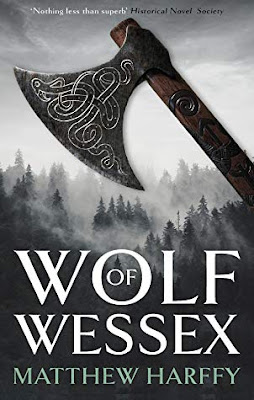 "Matthew Harffy has triumphed again with this novel, a stand alone that works brilliantly."

"AD 838. Deep in the forests of Wessex, Dunston's solitary existence is shattered when he stumbles on a mutilated corpse. Accused of the murder, Dunston must clear his name and keep the dead man's daughter alive in the face of savage pursuers desperate to prevent a terrible secret from being revealed. Rushing headlong through Wessex, Dunston will need to use all the skills of survival garnered from a lifetime in the wilderness. And if he has any hope of victory against the implacable enemies on their trail, he must confront his long-buried past – becoming the man he once was and embracing traits he had promised he would never return to. The Wolf of Wessex must hunt again; honour and duty demand it."

When we meet Dunston, he is living as a woodsman and blacksmith in a forest in Somerset but a chance encounter changes the course of his life. Aedwen has been travelling with her itinerant pedlar father after the death of her mother. She is forced to run and hide when her father is ambushed in the forest. She hears his screams and remains hidden long after those cries quieten. Dunston and Aedwen embark on an adventure neither expected and neither wanted - Aedwen wishing her father never decided to travel, and Dunston wishing he'd never left his house the morning he discovered the pedlar's body.

As the story progresses we discover that maybe this is not such a departure from the norm for Dunston as he proves to Aedwen that he is no normal man but one she can rely on to keep her safe. Aedwen discovers unknown depths in herself and a resilience that surprised her.

Matthew Harffy has triumphed again with this novel, a stand alone that works brilliantly. As he has written so much, I wasn't sure it was a stand alone until I read the perhaps lengthy author's note at the end as it could so easily slot into a series, and yet there are no info dumps and the blend of the past setting and the present events is seamless. Despite its being based on real events, this story does leave the door wide open for a prequel giving us the full history of Dunston and his life. Tempting, obviously, but maybe Dunston is best left in peace.

Harffy is, of course, a man, and can be forgiven for being able to develop Dunston more than Aedwen - he has no experience of being a fifteen year old girl, after all, (they don't weep quite as much as he would have us believe) but one can forgive him because the novel is otherwise perfectly constructed and excellently executed.

This novel, more than the series, proves Harffy's talent as a writer.